Ladd Observatory is an astronomical observatory at Brown University in Providence, Rhode Island. Founded in 1891 it was primarily designed for student instruction and also research. The facility operated a regional timekeeping service. It was responsible for the care and calibration of clocks on campus including one at Carrie Tower and another that rang the class bell at University Hall. Meteorological observations were made there from the time the building opened using recording weather instruments.

In addition to general astronomy courses it was also used for teaching civil engineering topics such as geodesy. Nautical science subjects, including celestial navigation, were taught there during the First World War.

Ladd began a regular schedule of open nights for public viewing in 1930. This led to the creation of the Skyscrapers amateur astronomy society in 1932 which regularly met at Ladd. The Skyscrapers then acquired the Seagrave Observatory in 1936 which was then used as a meeting place. Amateur astronomers from the group continued to volunteer at Ladd and also participated in Brown University solar eclipse expeditions. Members constructed a Schmidt camera for the 1937 Brown eclipse expedition.

Ladd was added to the National Register of Historic Places in 2000. It continues to be used by the Department of Physics at Brown for astronomy instruction. It is regularly open to the public as a science center and technology museum.

The observatory is named for benefactor Herbert W. Ladd who offered to fund the construction in the spring of 1889. The building was designed by the Providence-based firm of Stone, Carpenter & Willson in the Classical Revival style. The selected site was the highest point in Providence at the time, on what was once known as Tintop Hill on the East Side. Construction began in May 1890 and the building was dedicated on October 21, 1891. The total cost of construction and equipping the facility in 1891 was US$40,000, equivalent to $900,000 in 2018. 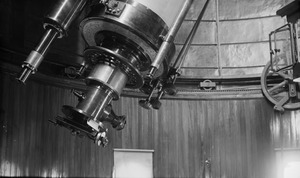 A filar micrometer attached to the main telescope, 1890s.

The primary telescope is a refractor with a 12-inch (300 mm) aperture objective and focal length of 15 feet (4.6 m). The lens was figured by John Brashear following the design of Charles S. Hastings. The crown glass was made by Mantois of Paris and the flint glass by the optical works at Jena in Germany. The equatorial mount and mechanical clock drive were made by George N. Saegmuller. This telescope was used for scientific work such as lunar occultation timings to make a more precise determination of the orbit of the Moon. Instruments such as a filar micrometer could be attached to the telescope.

Another telescope, a 3-inch (76 mm) meridian circle instrument, also made by Saegmuller, was used for observations related to timekeeping. Similar, but smaller, instruments were used for student instruction. 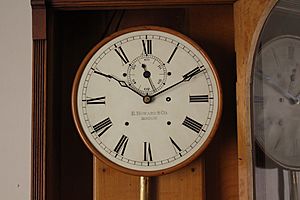 The 1895 Howard regulator formerly used to ring the bell at University Hall. (See § text below, below.)

As a number of other observatories did in the late 19th century Ladd provided an accurate regional timekeeping service by transmitting a time signal via telegraph wire. Observations of select stars were made with the meridian circle instrument as the star transited (or crossed) the meridian. This data was then used to calibrate a high quality pendulum clock set to keep sidereal time. Calculations were then performed to convert sidereal time to local standard time. A second clock keeping standard time was equipped with a telegraphics break circuit mechanism to automatically generate the time signals. These precision clocks were known as astronomical regulators. Timekeeping instruments used at Ladd include regulators made by Robert Molyneux, Edward Howard, Hezekiah Conant, and Sigmund Riefler. 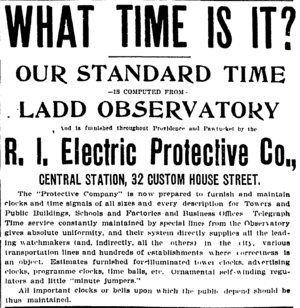 Prior to the Ladd time service the city relied on time signals from either Harvard College Observatory or the United States Naval Observatory that were transmitted via Western Union Telegraph wires. In many cases these signals were found to be inaccurate due to transmission delay or accidents. Time signals from Ladd were first sent on September 12, 1893. The observatory sold these time signals to Rhode Island Electric Protective (RIEP) company, a local fire and burglar alarm firm. The signals from Ladd were redistributed to RIEP customers including "jewelers" (i.e. clockmakers) who repaired and calibrated watches.

The signals were also used to directly control a clock network of several hundred slave clocks in various business offices. The revenue that the university received from the time signal service in 1906 was US$200 (equivalent to $4,700 in 2018) per year. Another telegraph wire connected the observatory to the Fire Department at City Hall which was used to signal the accurate time to the community by fire alarm bells at noon and 8:30 p.m. every day. Time signals from Ladd were also used to synchronize the regulator used to ring the bell in the cupola of University Hall on the main campus. The bell marked the beginning and end of class periods.

Ladd first received experimental wireless time signals from the Naval Observatory in November 1913. The purpose of the experiment was to measure the difference in longitude between Washington and Providence. The signals were transmitted by the Navy radio facility NAA in Arlington, Virginia. In 1915 Brown installed a sophisticated "wireless plant" consisting of a 450-foot-long (140 m) antenna strung between a tower on University Hall and another tower on Maxcy Hall. The operator's station with transmitting and receiving equipment was located in the basement of Wilson Hall, a building midway between the two towers. Primarily intended for engineering instruction and physics experimentation it was also used to receive the time signals from Arlington. On November 24, 1916 the transit instrument observations were discontinued and the clocks were instead calibrated by the NAA signals. The transit observations resumed on April 10, 1917 due to a US government order to dismantle the radio set at Ladd when the U.S. entered the First World War. These calibration observations continued through October 16, 1919. 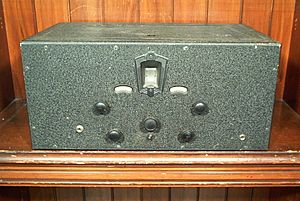 Calibration by Naval Observatory time signals from radio station WWV resumed after the war ended. These early transmissions were longwave, so called due to the long wavelength. Frequencies, and corresponding wavelengths, from 15 kilohertz (20,000 m) to 150 kilohertz (2,000 m) were used. These transmissions required special equipment such as the installation at Wilson Hall to receive them. By the 1930s it had become common to use a simple and inexpensive shortwave radio of the kind used to receive broadcast programs. This radio could also be used to receive time signal transmissions from Greenwich, Paris, and Berlin. The radio was directly wired to the clock circuits to allow recording the time signals.

H. P. Lovecraft, author of weird fiction, had free access to the observatory for several years. He wrote astronomy articles for Providence newspapers based upon his study there between 1906 and 1918.

All content from Kiddle encyclopedia articles (including the article images and facts) can be freely used under Attribution-ShareAlike license, unless stated otherwise. Cite this article:
Ladd Observatory Facts for Kids. Kiddle Encyclopedia.