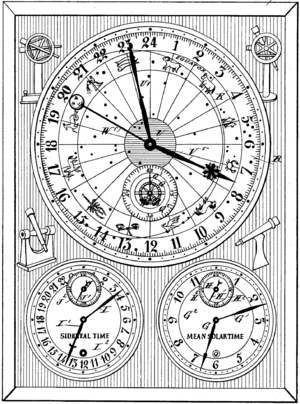 An astronomical clock with dials for showing both sidereal and solar time.

A sidereal day is the length of time it takes a planet to rotate from the perspective of a distant star. For the planet Earth a sidereal day is approximately 23 hours, 56 minutes, and 4 seconds.

Astronomers use sidereal time to keep track of the direction to turn the telescopes to view a star in the night sky.

By contrast, solar time is reckoned by the movement of the Earth from the perspective of the Sun. An average solar day (24 hours) is longer than a sidereal day (23 hours, 56 minutes, 4 seconds) because of the amount the Earth moves each day in its orbit around the Sun.

All content from Kiddle encyclopedia articles (including the article images and facts) can be freely used under Attribution-ShareAlike license, unless stated otherwise. Cite this article:
Sidereal day Facts for Kids. Kiddle Encyclopedia.