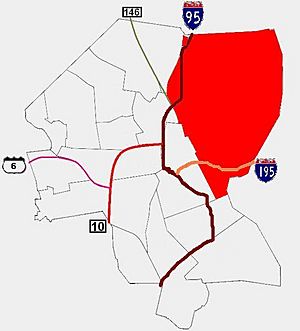 Providence neighborhoods with the East Side in red

The East Side is a collection of neighborhoods in the eastern part of the city of Providence, Rhode Island. It officially comprises the neighborhoods of Blackstone, Hope (commonly known as Summit), Mount Hope, College Hill, Wayland, and Fox Point. 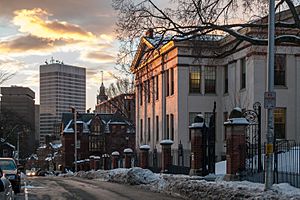 View of skyscrapers in Downtown Providence from College Hill

Roger Williams founded Providence along College Hill. This area thus includes some of the oldest sections of the city. The spot where Williams landed after crossing the Seekonk River is marked by a small park in Fox Point.

The East Side contains numerous parks and green spaces. India Point Park, the largest of these, is located along the northernmost shore of Narragansett Bay. It is the only large expanse of Bay-side shoreline in Providence reserved for public use.

Interstate 195 separates the park from the rest of Fox Point. Construction plans for the relocation of 195 include plans for a new, larger pedestrian bridge over the interstate, to allow better access between the park and the rest of India Point.

Mostly residential, the East Side is the most affluent part of the city with higher property values, lower unemployment, and higher income levels than the city as a whole. Approximately 20% of the city's 190,934 people live on the East Side. Mount Hope and the area along Elmgrove Avenue have historically had a large community of Russian Jews. 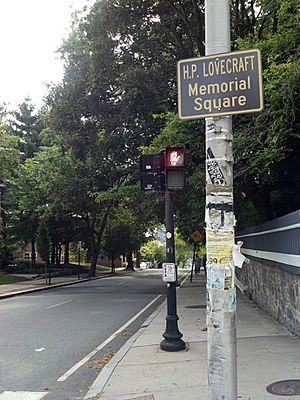 The East Side contains the oldest section of the city. The Providence Preservation Society and the Rhode Island Historical Society have preserved numerous historic buildings, especially in the College Hill area. Historic landmarks include:

All content from Kiddle encyclopedia articles (including the article images and facts) can be freely used under Attribution-ShareAlike license, unless stated otherwise. Cite this article:
East Side, Providence, Rhode Island Facts for Kids. Kiddle Encyclopedia.