Fox Point retains much of its historical character, with housing stock dating from the 18th and 19th centuries in much of the neighborhood. Vernacular interpretations of the Federal, Greek revival, and Italianate architectural styles are well represented West of Governor Street, while somewhat more recent construction dominates on Ives and Gano Streets.

Originally used for farmland, Fox Point's economy quickly changed to maritime affairs with the construction of Providence's first port at India Point in 1680, becoming a major trading point in the Atlantic Triangular trade of slaves, sugar cane and rum between New England, the West Indies, and West Africa. 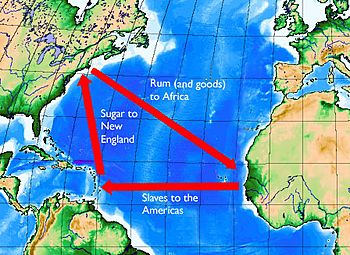 Depiction of the Triangular Trade of slaves, sugar, and rum with New England instead of Europe as the third corner

The neighborhood derives its name from Tockwotten Hill, which was largely leveled (along with slum residences) as part of a public works project in the 19th century. The fill was used to reclaim part of the Seekonk River now consisting of Gano Street and land to the east of Gano Street. Once the area's street grid had been laid, Fox Point developed as a residential neighborhood.

However, with the completion of the Boston and Providence Rail Road, and regular steamship connections to ports along the East Coast, Fox Point became an attractive location for industry. New industry attracted many immigrants, first Irish, though by the second half of the 19th century the neighborhood was home to increasing numbers of Portuguese and Cape Verdeans. Many Portuguese-American institutions remain in Fox Point, though the Portuguese community is much smaller than it once was.

The proximity of Brown University has led to a combination of student housing and gentrification in the neighborhood that has displaced many of the long-term residents. 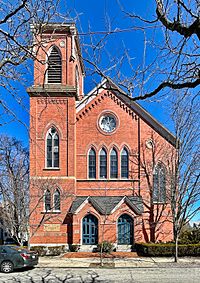 The median family income is $55,315, above the citywide average of $32,058. 8% of households live below the poverty line, while 2% of households receive some form of public assistance. 14% of children under the age of six have been exposed to hazardous amounts of lead. This is due to the prevalences of lead paint in older buildings.

India Point Park is located along the northern shore of Narragansett Bay, at Green Jacket Shoal and the confluence of the Seekonk and the Providence River, the park is the only large expanse of Bay-side shoreline in Providence preserved for public use.

Interstate 195 separates the park from the rest of Fox Point. Construction plans for the relocation of 195 include a new, larger pedestrian bridge over the interstate, to allow better access between the park and the rest of India Point.

Friends of India Point Park is a notable citizens organizations interested in maintaining the park. 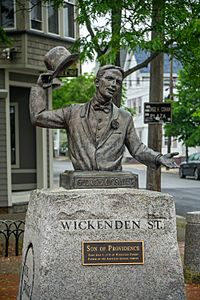 All content from Kiddle encyclopedia articles (including the article images and facts) can be freely used under Attribution-ShareAlike license, unless stated otherwise. Cite this article:
Fox Point, Providence, Rhode Island Facts for Kids. Kiddle Encyclopedia.