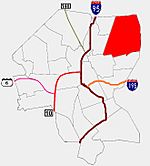 Providence neighborhoods with Blackstone in red

Blackstone is a predominantly residential neighborhood in Providence, Rhode Island. It is in the northeast corner of the city and is bounded to the south and west by Lloyd Avenue and Hope Street respectively. It is one of six neighborhoods comprising the East Side of Providence. 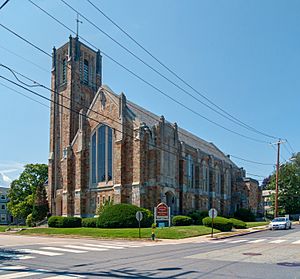 Blackstone is one of the newest parts of Providence, as the remoteness of its location and marshy land had precluded significant development before the late 19th century. The area's connection to the rest of the city improved when a second public horse car line was completed, though it was the completion of the landscaped Blackstone Boulevard in 1894 that triggered rapid development in the area.

According to the Providence Plan,a local nonprofit aimed at improving city life, 92.5% of residents are white, well above the citywide average of 54.5%.

The neighborhood is home to a significant Jewish population. The Jewish Community Center of Rhode Island was established on Elmgrove Avenue in 1971; later this merged with other communal organizations and became known as the Jewish Alliance of Rhode Island. The area is also home to the Providence Hebrew Day School on Elmgrove Avenue and Temple Emmanuel on Morris Avenue.

All content from Kiddle encyclopedia articles (including the article images and facts) can be freely used under Attribution-ShareAlike license, unless stated otherwise. Cite this article:
Blackstone, Providence, Rhode Island Facts for Kids. Kiddle Encyclopedia.