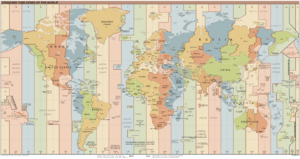 Standard time is putting all clocks in a time zone to the same time.

Standard time was first used by British railways on December 11, 1847, when they switched from local mean time to Greenwich Mean Time (GMT). Almost all of Great Britain's public clocks were using GMT by 1855.

Before 1883, local mean time was used in all of North America. This meant there were many different local times. This caused problems for train schedules. Sandford Fleming, a Canadian, proposed standard time at a meeting of the Royal Canadian Institute on February 8, 1879. The owners of the major railroads met in Chicago to make the Standard Time System. Most states began using the system soon after the railroads. The U.S. government officially began using the system almost fifty years later.

All content from Kiddle encyclopedia articles (including the article images and facts) can be freely used under Attribution-ShareAlike license, unless stated otherwise. Cite this article:
Standard time Facts for Kids. Kiddle Encyclopedia.