The Need for a City Hall

Upon the city's incorporation in 1832, most city business was conducted at the Market House. The City Council, Mayor's Office, and Board of Aldermen were located on the second floor; as the city grew, the city spread to the third floor, and eventually took over the entire building, which became known as the "City Building." Before long, even this wasn't enough space, and in 1845 the City Council resolved to create a permanent municipal building. The community spent the next 30 years searching for a suitable location, because half the Council votes were on the east side of the Providence River, and half the votes were on the west. This resulted in what some historians have referred to as "Providence's Thirty Years War," as the council bickered over where to site the new building.

The city purchased several lots for the construction of a new City Hall. Construction was delayed, however, and the land was leased to C.N. Harrington, who built a wood frame theater on the site. The theater was notable for lectures, performances and readings that included writer Charles Dickens. In 1869, the building was renamed "Harrington Opera House." In 1874, the structure was closed for demolition.

An open call for design led to twenty one submissions, and four finalists. Samuel J. F. Thayer's "Blue Wafer" design was chosen, and he was paid $1000.00USD. The building, modified from its original design, would cost the city $1,000,000.USD. The cornerstone was laid on June 24, 1875. Inaugurated on November 14, 1878, The Providence Journal called the building "Our Municipal Palace."

In 1975, Mayor Vincent A. Cianci, Jr., historian and preservationist, Antoinette Downing, and art history teacher Eleanore Monahon began efforts to rehabilitate the deteriorating structure, after concerns began to grow about possible demolition. The project was completed in the 1990s. 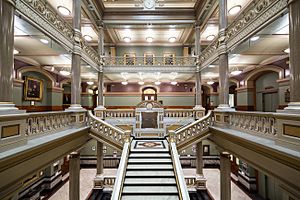 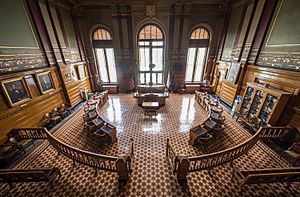 "The building's construction is of iron and brick, faced with Westerly granite on the Dorrance and Washington Street sides and New Hampshire granite on the other two sides. The sidewalks are granite blocks, 5 to 6 feet wide and 18 to 20 feet long. The entire structure was built on an artificial foundation set atop 3,128 pilings driven deep into the underlying hardpan."

"Four coal-fired boilers of 50 horsepower each provided heat for the building. The boilers also supplied energy to operate a water-powered elevator, capable of carrying up to 50 passengers at one time. The elevator was built with electric bells at each landing so that it could be summoned to the desired floor."

In the pre-electricity age, "to keep clocks accurate and uniform, a central control mechanism was installed. It operated in a fashion similar to a grandfather clock, and each morning would be wound up by the janitor. It sent battery powered signals to other clocks in the building. Although the building was wired for electricity shortly after its construction, the clock mechanism remains in place and can be seen in the fifth floor Archives."

"The original main floor included a reception room and the office for the City Messenger. His office contained an elaborate array of communication devices, 50 speaking tubes, 50 electric bells and 50 annunciators which connected to all departments. Next to the Messenger's Office was an ornate reception room, 23 feet by 33 feet, with large mirrors hung at each end of the room. The walls were finished in mahogany and stamped leather."

"The fifth floor living quarters for the janitor and his family included a kitchen, parlor, two bedrooms and a bath. The remainder of the fifth floor was used by the City Engineer and for storage. The upper levels of the building are within a high, convex, mansard slate roof that rises above the parallel-eaved parapet. Fashioned into the mansard dome are ornamental bulls-eye dormers."

"The mansard roof area is reached by an iron stairway from the fifth floor where, originally, large batteries were stored to generate electricity for the city-wide fire alarm system and for the operation of the clocks and bells in the building. Another flight of stairs led to a higher area in the mansard dome which was also used for storage."

Famous speeches from the steps

All content from Kiddle encyclopedia articles (including the article images and facts) can be freely used under Attribution-ShareAlike license, unless stated otherwise. Cite this article:
Providence City Hall Facts for Kids. Kiddle Encyclopedia.