Hall of Fame for Great Americans facts for kids

The Hall of Fame for Great Americans is an outdoor sculpture gallery located on the grounds of Bronx Community College in the Bronx, New York City. It is the first such hall of fame in the United States. Completed in 1900 as part of the University Heights campus of New York University, the 630-foot (192 m) stone colonnade half-encircles the university library and houses 98 bronze portrait busts of a number of prominent Americans. Designed by architect Stanford White (who also designed the library), the Beaux Arts structure was donated by Helen Gould, and was formally dedicated on May 30, 1901. New York University (under severe financial distress) was forced to sell the campus in 1973 to the City University of New York and it became Bronx Community College. Though the Hall's renown has itself faded, its architecture remains, and it stands as a secular national shrine not just to great men (and some women), but to Roman ideals of fame favored at the beginning of the 20th century. 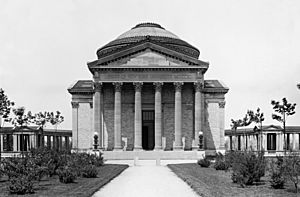 The library in 1904; Hall of Fame for Great Americans arcade is visible left and right. Architect Stanford White.

The library and hall stand on the heights occupied by the British army in the autumn of 1776 during its successful attack upon Fort Washington. Dr. Henry Mitchell MacCracken, Chancellor of New York University, was the originator of The Hall of Fame.

It was the first hall of fame in the United States. "Fame" here means "renown" (rather than today's more common meaning of "celebrity"). Chancellor MacCracken acknowledged inspiration from the Ruhmeshalle (Hall of Fame) in Munich, Germany.

Other monuments of a similar purpose had been built earlier. King Ludwig I of Bavaria actually built two: a Walhalla Ruhmes- und Ehrenhalle near Regensburg, Germany, completed in 1842, and a Ruhmeshalle auf der Anhöhe (Bavarian Hall of Fame), in Munich, completed in 1853. Chancellor McCracken described the evolution of the idea for the Hall of Fame:

The Hall of Fame ... owes its inception in large part to hard facts of physical geography. After the three buildings which were to form the west side of the quadrangle of the New York University College of Arts and Science at University Heights had been planned, it was decided, in order to enlarge the quadrangle, to push them as near as possible to the avenue above the Harlem River. But since the campus level is 170 feet above high tide, and from 40 to 60 feet above the avenue, it was seen at once that the basement stories would stand out towards the avenue bare and unsightly. In order to conceal their walls, a terrace was suggested by the architect, to be bounded at its outer edge by a parapet or colonnade.

But while aesthetics compelled the architect to invent the terrace with its parapet of colonnade, the university's necessity compelled the discovery of an educational use for the architect's structure. Like most persons who have visited Germany, the chairman was acquainted with the "Ruhmes Halle," built near Munich by the King of Bavaria. Like all Americans, he admired the use made of Westminster Abbey, and of the Pantheon in Paris. But the American claims liberty to adopt new and broad rules to govern him, even when following on the track of his Old-World ancestors. Hence it was agreed that admission to this Hall of Fame should be controlled by a national body of electors, who might, as nearly as possible, represent the wisdom of the American people. 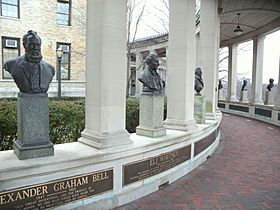 The memorial structure is an open-air colonnade, 630 feet in length with space for 102 bronze sculptures, designed in the neoclassical style by architect Stanford White. The library is similar to Low Library at Columbia, designed by White's partner Charles Follen McKim. The colonnade also runs behind (west of) the Hall of Languages to the south, and the Hall of Philosophy to the north.

Carved in stone on pediments of The Hall of Fame are the words "By wealth of thought, or else by mighty deed, They served mankind in noble character. In worldwide good they live forever more."

The base to each sculpture holds a bronze tablet bearing the name of the person commemorated, significant dates, achievements and quotations. Each bronze bust must have been made specifically for The Hall of Fame and must not be duplicated within 50 years of its execution.

The Hall of Fame for Great Americans is largely forgotten. For two decades before 1997, in fact, it lacked the funds to hold new elections or to commission busts of the people it elected, including Louis Brandeis, Clara Barton, Luther Burbank, and Andrew Carnegie. It took nineteen years to raise the $25,000 needed to commission the bust of Franklin Delano Roosevelt. In the late 1970s the state spent $3 million restoring the colonnade's crumbling foundation; more recently, it spent another $200,000 to restore the 98 bronze busts, many of which had deteriorated badly. By that time private gifts, which were always the Hall of Fame's primary source of support, had effectively ceased.

In 2001, Bronx Community College organized a US$1 million fund-raising effort to rebuild and expand the Hall of Fame.

To be eligible for nomination, a person must have been a native born or naturalized (since 1914) citizen of the United States, must have been dead for 25 years (since 1922; from 1900 through 1920, a nominee had to be dead only 10 years) and must have made a major contribution to the economic, political, or cultural life of the nation. Nominees were elected by a simple majority vote, except from 1925 through 1940, when a 3/5 majority was required. In 1976 a point system replaced the majority vote. Two nominees, Constance Woolson (nominated in 1900) and Orville Wright (elected in 1965), were considered, although being dead only 6 and 17 years respectively.

MacCracken wanted to make sure that the people enshrined in his Hall of Fame were truly famous, not just memorable. So he established a board of electors, composed of men and women who were themselves possessed of some measure of renown, ostensibly people of great character and sound judgment. Over the years that body would include the most respected writers, historians, and educators of their day, along with scores of congressmen, a dozen Supreme Court justices, and six Presidents; seven former electors have themselves been elected to the Hall of Fame. To ensure that nominees would be evaluated with adequate sobriety and perspective, it was decided that no one could be elected who had not been dead for at least twenty-five years. Everyone thought that was just fine; after all, as the old maxim holds, 'Fame is a food that dead men eat'.

The Hall of Fame soon became a focal point for US national pride:

It was a truly democratic institution — anyone could nominate a candidate, admission would be free, and although NYU served as a steward, raising funds and running the elections, the whole thing was technically the property of the American people.

... and people took it very, very seriously. Newspaper publishers used their editorial pages to lobby for or against nominees, and groups like the American Bar Association and the United Daughters of the Confederacy (helped elect "Stonewall" Jackson in 1955 and, without success, Jefferson Davis) waged extensive, expensive campaigns to get "their" candidates elected. Installation ceremonies were elaborate events. For a while the term "Hall of Famer" carried greater cachet than "Nobel laureate", and a hilltop in the Bronx seemed, to many, the highest spot in the country, if not the world. 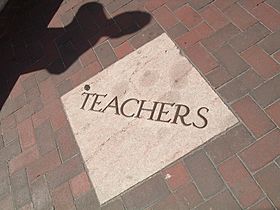 The first 50 names were required to include representatives of a majority of 15 classes: 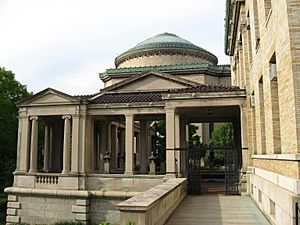 In addition to Constance Woolson and Jefferson Davis the following people were among those nominated at least once but not elected:

Busts of Robert E. Lee and Stonewall Jackson were ordered removed from the Hall of Fame for Great Americans in August 2017 by New York Governor Andrew Cuomo.

All content from Kiddle encyclopedia articles (including the article images and facts) can be freely used under Attribution-ShareAlike license, unless stated otherwise. Cite this article:
Hall of Fame for Great Americans Facts for Kids. Kiddle Encyclopedia.