Sparkill, formerly known as Tappan Sloat, is a suburban hamlet and census-designated place in the Town of Orangetown, Rockland County, New York, United States located north of Palisades; east of Tappan; south of Piermont and west of the Hudson River. As of the 2010 census, the CDP had a population of 1,565. The hamlet is home to St. Thomas Aquinas College and the Dominican Sisters of Sparkill.

Sparkill used to be served by the Northern Branch of the Erie Railroad, with service to Pavonia Terminal in Jersey City, New Jersey. Passenger service was discontinued in 1966. 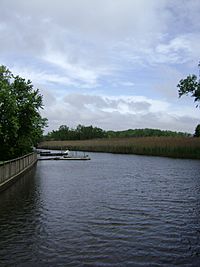 All content from Kiddle encyclopedia articles (including the article images and facts) can be freely used under Attribution-ShareAlike license, unless stated otherwise. Cite this article:
Sparkill, New York Facts for Kids. Kiddle Encyclopedia.