Navajo Bridge is the name of each of a pair of steel spandrel arch bridges that cross the Colorado River in the Grand Canyon National Park (near Lees Ferry) in northern Coconino County, Arizona, United States. The newer bridge of the pair carries vehicular traffic on U.S. Route 89A (US 89A) over Marble Canyon between Bitter Springs and Jacob Lake, allowing travel into a remote region north of the Colorado River including the North Rim of Grand Canyon National Park.

Prior to completion of the first Navajo Bridge, one of the only Colorado River crossings between Arizona and Utah was located about 5 miles (8.0 km) upstream from the bridge site, at the mouth of Glen Canyon where Lees Ferry service had operated since 1873. The ferry site had been chosen as the only relatively easy access to the river for both northbound and southbound travellers. By the 1920s, automobile traffic began using the ferry service though it was not considered a safe and reliable crossing as adverse weather and flooding regularly prevented its operation.

The dual spans of Navajo Bridge are tied at ninth place among the highest bridges in the United States with nearly identical heights of 467 feet (142.3 m) for the original span, and 470 feet (143.3 m) for the second span. 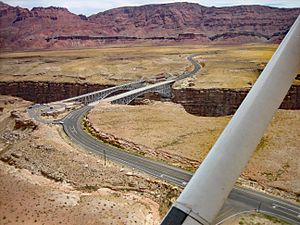 Aerial view of Navajo Bridge with the newer bridge in the foreground, July 2005

Construction of the original Navajo Bridge began in 1927, and the bridge opened to traffic in 1929. The bridge was paid for by the nascent Arizona State Highway Commission (now the Arizona Department of Transportation) in cooperation with the United States Department of the Interior's Bureau of Indian Affairs, as the eastern landing is on the Navajo Nation. The steel spandrel bridge was designed and constructed by the Kansas City Structural Steel Company. During construction, worker Lane McDaniel died after falling 470 feet (140 m) to the Colorado River below. Supervisors had rejected the idea of rigging safety netting, believing that it would catch on fire from falling hot rivets.

The original bridge is 834 feet (254 m) in length, with a maximum height of 467 feet (142 m) from the canyon floor. The roadway offers an 18-foot (5.5 m) surface width with a load capacity of 22.5 tons (although the posted legal weight limit was 40 tons). During the design phase, a wider roadway was considered, but ultimately rejected, as it would have required a costly third arch to be added to the design, and the vehicles of the time did not require a wider road. When the Bridge officially opened on January 12, 1929, the Flagstaff paper proclaimed it "the biggest news in Southwest history."

By 1990, however, officials decided that the traffic flow was too great for the original bridge and that a new solution was needed. The sharp corners in the roadway on each side of the approach had become a safety hazard due to low visibility, and deficiencies resulting from the original design's width and load capacity specifications were becoming problematic. The bridge had also become part of US 89A. 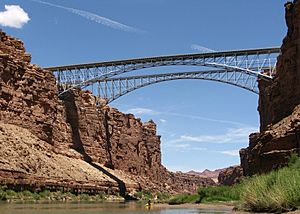 A view of the bridges and Marble Canyon from the Colorado River, September 2009

Deciding on a solution was difficult, due to the many local interests. Issues included preservation of sacred Navajo land, endangered plant species in Marble Canyon, and the possibility of construction debris entering the river. The original proposal called for merely widening and fortifying the bridge, but this was ultimately rejected as not able to meet contemporary federal highway standards. Replacement became the only option, and it was eventually decided to entirely discontinue vehicular traffic on the original bridge. A new bridge would be built immediately next to the original and have a considerably similar visual appearance, but would conform to modern highway codes.

The new steel arch bridge was commissioned by the Arizona Department of Transportation and the Federal Highway Administration, and was completed in May 1995, at a cost of $14.7 million. A formal dedication was held on September 14, 1995.

The original Navajo Bridge is still open to pedestrian and equestrian use, and an interpretive center has been constructed on the west side to showcase the historical nature of the bridge and early crossing of the Colorado River. The original bridge has been designated as a Historic Civil Engineering Landmark, and was placed on the National Register of Historic Places on August 13, 1981.

California condors were reintroduced to the area in 1996 and can sometimes be seen in the at Navajo Bridge.

All content from Kiddle encyclopedia articles (including the article images and facts) can be freely used under Attribution-ShareAlike license, unless stated otherwise. Cite this article:
Navajo Bridge Facts for Kids. Kiddle Encyclopedia.