The Tappan Zee Bridge is a bridge in lower New York. It is three miles long. It goes across the Hudson River. It connects Westchester and Rockland Counties. The bridge opened in 1955. It took traffic from other bridges and ferries in the area. The bridge is about 25 miles north of New York City. The city can be seen from the bridge on a clear day. The bridge carries seven lanes of the New York State Thruway.

The bridge is named for a Native American tribe from the area called the "Tappan". Zee is the Dutch word for "sea", as the bridge crosses water.

At the beginning of the 21st century the bridge was old and too small for the traffic. People in the region argued for years for a new bridge, which replaced the old one in 2017.

In 2013, the New York State Thruway Authority began building the New Tappan Zee Bridge. It will be a double-span bridge (four lanes per span in opposite directions) with designated bus lanes. The new bridge is planned to be ready to open in 2018. 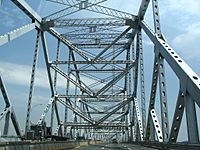 The superstructure was constructed during a period of material shortages during the Korean War.

All content from Kiddle encyclopedia articles (including the article images and facts) can be freely used under Attribution-ShareAlike license, unless stated otherwise. Cite this article:
Tappan Zee Bridge Facts for Kids. Kiddle Encyclopedia.