Kids Encyclopedia Facts
This page is about the robotic pet. For the Japanese television series, see Aibō.

AIBO (stylized aibo, Artificial Intelligence Robot, homonymous with aibō (相棒), "pal" or "partner" in Japanese) is a series of robotic dogs designed and manufactured by Sony. Sony announced a prototype Aibo in mid-1998. The first consumer model was introduced on 11 May 1999. New models were released every year until 2006. Although most models were dogs, other inspirations included lion-cubs or huskies/jack-russel terrier/bull terrier, and space explorer, and only the ERS-7 version, ERS-110/111 and ERS-1000 versions was explicitly a "robotic dog", but the 210 can also be considered a dog due to its jack-russel terrier appearance and cute puppy face.

In 2006, AIBO was added into the Carnegie Mellon University Robot Hall of Fame.

On 26 January 2006 Sony announced that it would discontinue AIBO and several other products in an effort to make the company more profitable. Sony's AIBO customer support was withdrawn gradually, with support for the final ERS-7M3 ending in March 2013.

In July 2014, Sony stopped providing repairs for AIBO products and did not provide customer support or repair for the older AIBO robots.

Several prototypes have been displayed by Sony. Early models were insect-like with six legs. The specifications and design of the 1998 prototype, described in a Sony press release, closely match those of the first generation AIBOs. Differences include the use of PC-Cards for memory (rather than MemoryStick media), the use of two batteries, and the option to use a 2-wheeled "rolling module" in place of legs.

The ERS-111 was an improved version of the original AIBO, initially released in November 1999. 40,000 units in total. Same price as ERS-110. It looks similar to ERS-110, but with different ear/tail shapes and different capabilities. It was available in a shiny silver with black claws or a metallic black color.

The ERS-210 was designed to look like a lion cub but is really a dog with a flat bull terrier face and jack-Russel appearance. It has speech recognition capabilities. The colors were black, silver, gold, red, blue, green, white. It is the most common and most popular AIBO model and sold over 65,000 units. It cost around $1,500 at launch and eventually went down to less than $1,000.

Silver. Headlights and LED near future-oriented design based on the concept of space exploration robot by Shoji Kawamori. It is nearly identical to the ERS-210 besides in outer shell. It sold around 5,000 to 7,000 units. Remote operation is possible by using the optional Wireless LAN card as well as the ERS-210 "AIBO Navigator 2". Height 29.6 cm, 1.5 kg weight, 1.5 hours (default) continuous operation time, 2.5 hours or more operation with a re-celled battery. 16 degrees of freedom (drive unit), price 180 000 yen (excluding tax)

Variants of ERS-210/220. Difficult to distinguish the appearance but with improved CPU and head clutch. Displays affixed logo sticker "Super Core" at the bottom of the body. US$1299 at launch.

The ERS-31x models had an "AIBO's heart" slogan. The original production design illustrator was Katsura Moschino. The price was 98,000 YEN, OR US$950. The "Latte" (ERS-311) is an off-white/cream color and is considered the "friendly" model. The "Macaron" (ERS-312) is mostly black with cream accents and is considered the "naughty" model. The "Pug" (ERS-31L) is the least common of the three and was $200 cheaper. The 31x series dogs are considered to look like a Bichon puppy or a bear cub.

These models are aesthetically identical to their 31x predecessors but have an added Bluetooth capability chip installed to enable communication with the "Handy viewer." The Handy Viewer was an exclusive Japanese device that would translate Aibos thoughts and feelings into text, and enable the handler to play games with them. While the ERS-311 and ERS-312 received these new releases, the ERS-31L never received the Bluetooth update to their hardware.

November 2003
This AIBO is regarded as the culmination of the series. The first generation of the ERS-7 Series, and also the very first Aibo to play polyphonic MIDI files with no limits. One of the first of actual "dogs" in the series, besides the 110/111, and 210. Available in white. Packaged with MIND. US$1,599 at launch. This was the first model that talked in all of its versions, not just with special software. The ERS-7 and its variations sold around 25,000 units.

November 2004
The second generation of the ERS-7, the first actual Aibo with lead-free solder. packaged with MIND2. Available in black or white.

October 2005
The third generation of the ERS-7, but a variant of the ERS-7M2, packaged with MIND3. Another lead-free solder Aibo. Changed Wi-Fi. White, black, and champagne gold (called honey brown in Japan). The 7m3 version is different from the other ERS-7s because they can speak both English and Japanese. You can still raise them from birth like always, but its personality is slightly modified by every single interaction it has with you and its environment. This was the last model of Aibo until the line was discontinued in 2006.

The first model to be released since the AIBO project was discontinued in 2006. Requires an always-on internet connection to function fully and comes with an LTE SIM card and monthly subscription service to support interaction and learning in the cloud. This model of aibo has a much cuter appearance than most of the other models. The ERS-1000 can recognize up to 100 faces, and can memorize a customizable trick, and responds to over 50 voice commands. It costs around $3,000. 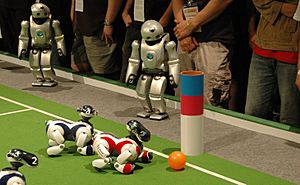 The humanoid QRIO robot was designed as the successor to AIBO and runs the same base R-CODE and Aperios operating system. Its development was halted before it saw a commercial release.

All AIBOs are bundled with AIBOLife software giving the robot a personality, the ability to walk, "see" its environment via camera and recognize spoken commands (English and Spanish, or Japanese). AIBO's sounds were programmed by Japanese DJ/avant-garde composer Nobukazu Takemura, fusing mechanic and organic concepts. The sounds in ERS-7 Mind and custom data were composed by Masaya Matsuura, a Japanese musician and game designer.

Aperios is Sony's Proprietary Real-Time Operating system, used in all AIBOs, QRIO and some other consumer devices. Aperios OS was intended to be widely deployed using revolutionary real-time capabilities to handle multiple audio and visual data streams concurrently The operating system was not widely adopted, and by 2003 Sony had stopped active development with COO Kunitake Ando commenting "Aperios was an operating system of a pre-Internet age and we decided that it isn't adequate for the future".

The OPEN-R architecture is specific to entertainment robots. The architecture involves the use of modular hardware components, such as appendages that can be easily removed and replaced to change the shape and function of the robots, and modular software components that can be interchanged to change their behavior and movement patterns. AIBO's creator, Doi, called OPEN-R the masterpiece of the AIBO development project, arguing it would minimize the need for programming individual movements or responses, and its "open" nature would encourage a global community of robot specialists and programmers to add capability.

First and second generation models of AIBO can load different software packages sold by Sony. AIBOware (a trademark of Sony corporation) is the title given to the software the AIBO runs on its pink Memory Stick. The Life AIBOware allows the robot to be raised from pup to fully grown adult while going through various stages of development as its owner interacts with it. The Explorer AIBOware allows the owner to interact with a fully mature robot able to understand (though not necessarily willing to obey) 100 voice commands. Without AIBOware, AIBOs run in "clinic mode" and can only perform basic actions.

AIBO's complete vision system uses the SIFT algorithm, to recognise its charging station. The vision system is an implementation of Evolution Robotics ERVision.

AIBOs in Education and Academia 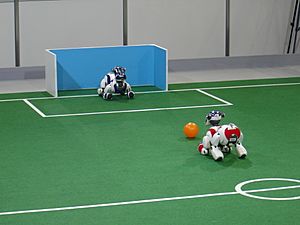 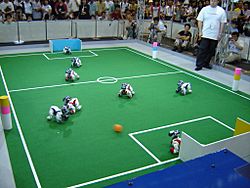 AIBO robots playing in the 9th RoboCup in Osaka (2005)

The AIBO has seen much use as an inexpensive platform for artificial intelligence education and research because it integrates a computer, vision system, and articulators in a package vastly cheaper than conventional research robots. One focal point for that development has been the Robocup Leagues.

The Four-Legged League was the initial name for the RoboCup Standard Platform League, a robot soccer league in which all teams compete with identical robots. The robots operate fully autonomously, with no external control by humans nor computers. The specific AIBO version changed over time: ERS-110s (1999,2000), ERS-210 (2001-2002), ERS-210A SuperCore (2003), ERS-7 (2004-2008). The replacement and current standard platform is the humanoid NAO by Aldebaran Robotics.

Sony provided AIBOs' support and sponsorship to universities around the world to participate in the RoboCup autonomous soccer competition Four-Legged Robot Soccer League. Competing teams would program a team of AIBO robots to play games of autonomous robot soccer against other competing teams. The Four-Legged League ran from 1999 to 2008, although in the final year, many big-name universities did not compete as they had moved to the new NAO platform. The University of New South Wales was the most successful team in the League, making the final six times and winning three times.

The International AIBO Convention takes place every year at Sony Robotics Tower in the Shinjuku prefecture. The first convention took place in 1999, on May 15. It was then set to May 2 to May 4. The 2009 convention, being in its tenth year, set attendance records. The convention usually features AIBO advertisements, free posters, free accessories, freeware/open-source downloads and "AIBO Shows".

Estimated sales for all first-generation models: 65,000

The AIBO anime Piroppo (ピロッポ) was based around AIBO ERS-300s, Latte, and Macaron. The anime triggered sounds and actions from viewer's ERS-300s in media-link mode on the proper software.

All content from Kiddle encyclopedia articles (including the article images and facts) can be freely used under Attribution-ShareAlike license, unless stated otherwise. Cite this article:
AIBO Facts for Kids. Kiddle Encyclopedia.