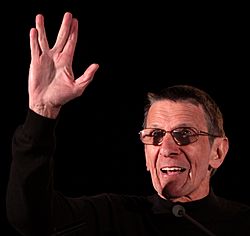 The Vulcan salute is a hand gesture which became popular by the 1960s television series Star Trek. It is done when the hand is raised with the palm forward and the thumb extended, while the fingers are parted between the middle and ring finger. It is a symbol of greeting by the character Spock. Nimoy based it on a hand gesture used by Jewish priests called Kohanim to bless people in Orthodox Jewish synagogues.

All content from Kiddle encyclopedia articles (including the article images and facts) can be freely used under Attribution-ShareAlike license, unless stated otherwise. Cite this article:
Vulcan salute Facts for Kids. Kiddle Encyclopedia.