The town is made up of three major villages: South Yarmouth, West Yarmouth, and Yarmouth Port.

Prior to European colonization, Yarmouth was inhabited by the Wampanoag, an Algonquian people. In the Wôpanâak language the area was called "Mattacheese". Wampanoag tribes living in Yarmouth at the time of European settlement included the Pawkunnawkuts on both sides of the lower Bass River, the Hokanums in what is now northeastern Yarmouth, and the Cummaquids in what is now western Yarmouth.

Yarmouth was organized and incorporated as part of the Plymouth Colony on September 3, 1639, following a settlement led by John Crowe (later Crowell), Thomas Howes and Anthony Thacher. Yarmouth originally included what is now the town of Dennis, which was incorporated as a separate community on June 19, 1793. Yarmouth is named after Great Yarmouth, a town in the county of Norfolk, on the east coast of England, which is itself at the mouth of the River Yare.

In 1642 and 1645, Yarmouth furnished soldiers for the Plymouth Colony's expeditions against the Narragansett. In 1648, the Plymouth Colony's legislature, the General Court, appointed Myles Standish to adjudicate land disputes among the Yarmouth settlers. Yarmouth soldiers served the Plymouth Colony in King Philip's War: fifteen Yarmouth men participated in the Great Swamp Fight without casualties, but the town did lose five men at Rehoboth. Yarmouth troops also saw service in the early years of King William's War. In the early eighteenth century, some of the Yarmouth veterans of King Philip's War were granted lands to settle in Gorham, Maine.

Yarmouth was the site of an active group of the Sons of Liberty during the American Revolution. The town's militia mustered to provide assistance to the minutemen at the Battles of Lexington and Concord, but the militia returned home upon news that the rebels had already triumphed on the field. In March 1776, Yarmouth troops served as part of George Washington's forces during the Fortification of Dorchester Heights. A meeting of Yarmouth citizens declared the town's independence from Great Britain on June 20, 1776. As a coastal community, Yarmouth was subject to blockade by the Royal Navy throughout the Revolutionary War.

In the early years of the Republic, Yarmouth shared with the rest of New England a strong support for the Federalist Party. The economy of Yarmouth was centered on maritime industries, and the townspeople were consequently opposed to the Jefferson Administration's Embargo Act of 1807 and Non-Intercourse Act of 1809.

On July 8, 1812, the Yarmouth town meeting voted to protest the recent Congressional declaration of war with Great Britain. Along with much of the rest of coastal New England, Yarmouth was subject to blockade by the Royal Navy beginning in 1814. Although the people of Yarmouth, including its militiamen, remained intensely opposed to the War of 1812, local militia forces did participate in attempts to counter the blockade. 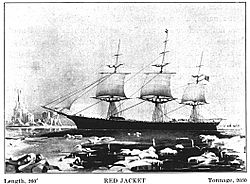 Yarmouth began as a farming community in which the people of the town raised pigs, cattle, and sheep. Due to livestock pasturage, firewood collection, shipbuilding, and the construction of the Old Colony Railroad, the old-growth forests of the Wampanoag era had disappeared from Yarmouth by the end of the nineteenth century, not to be replaced with stands of incipient second-growth forest until agriculture declined in the town during the twentieth century. 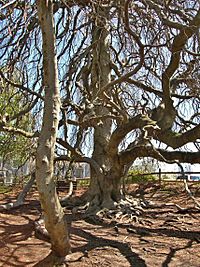 Although agriculture was a prominent part of Yarmouth life, the town's location led its people to make much of their living from the ocean. For centuries, many Yarmouth men worked as whalers. In the early nineteenth century, merchantmen skippered by Yarmouth captains participated in the China Trade between New England and the Cantonese trading center of Whampoa. Captain Ebenezer Sears of Yarmouth was the first American skipper to take a merchant vessel around the Cape of Good Hope. In 1854, Captain Asa Eldridge of Yarmouth skippered the clipper Red Jacket, a packet ship, between New York and Liverpool in only 13 days, 1 hour, and 25 minutes, dock to dock, setting a speed record for fastest trans-Atlantic crossing by a commercial sailing vessel that has remained unbroken ever since. In 1856, Captain Eldridge skippered the ill-fated steamship SS Pacific, which disappeared at sea on a voyage from Liverpool to New York. The house of another Yarmouth sea captain, Captain Bangs Hallet, is now a museum and home to the Historical Society of Old Yarmouth.

Developers began to refashion Yarmouth into a summer resort near the end of the nineteenth century. Hotels and summer cottage communities proliferated in the first half of the twentieth century, particularly along what is now Route 28. With the emergence of the car culture in the years just after World War II, these were joined first by many motels (mostly along Route 28 in West Yarmouth) and later by the denser, suburban pattern of residential housing construction that characterizes Yarmouth today.

The headquarters of the International Fund for Animal Welfare (IFAW), a global animal welfare and conservation charity founded in 1969, is located in Yarmouth Port. In 1970, the national Christmas Tree Shops retail chain was founded at a location on Route 6A in Yarmouth Port.

The Bass River and its tributaries make up the majority of the town's border with Dennis. There are also several smaller ponds throughout the town. The Cape Cod Bay shore is marshy, with several creeks flowing into it. The town's southern shore is known for its beaches, from the west jetty of the Bass River to Great Island, on the east and south sides of Hyannis Harbor. The town has no state forests or wildlife management areas, although there are many such natural, unprotected areas in town. The town is also the site of four golf courses, a rod and gun club, and a Boy Scout camp.

Cape Cod's three major east–west routes, U.S. Route 6, Massachusetts Route 6A and Massachusetts Route 28, all run through the town. Unlike many towns on the Cape, there are no other state routes crossing between the three roads, with all crossing routes being local roads. There are two exits off Route 6 (also known as the Mid-Cape Highway) in town.

Freight rail service is provided by the Massachusetts Coastal Railroad from the Barnstable town line to just west of Station Avenue south of U.S. Route 6, where a trash transfer station is located. Trash is loaded onto rail cars at the transfer station and hauled to the SEMASS waste-to-energy plant in Rochester. A portion of the Hyannis branch also passes through the western part of Yarmouth. From the nearby Hyannis station, the Cape Cod Central Railroad operates seasonal tourist excursions to Sandwich and Buzzards Bay, and the MBTA's CapeFLYER service offers seasonal weekend service to Boston, with stops in Bourne, Buzzards Bay, Wareham, and several commuter rail stations. The nearest inter-city (Amtrak) passenger rail stations are Boston's South Station and Providence. The nearest MBTA commuter rail stations are Kingston/Route 3 and Middleborough/Lakeville, providing direct service to Boston.

There are also several bike paths throughout town.

Yarmouth schools make up one-half of the Dennis-Yarmouth Regional School District. Yarmouth operates two elementary schools (Station Avenue and Marguerite E. Small) which serve students from pre-kindergarten through third grade and the Mattacheese Middle School for grades 6 through 7. Grades 4–5 are served at Wixon Innovative School in Dennis. The town is the home to Dennis-Yarmouth Regional High School, where both towns send their grade 8–12 students. (Unlike most high schools, which are 9–12) Their team colors are green and white, and their mascot is the dolphin.

Students who live in Yarmouth may also attend Cape Cod Regional Technical High School in Harwich or Sturgis Charter Public School in Hyannis; both for grades 9–12. In addition, they may choose to attend Saint Pius X School for grades pre-kindergarten through 8, or any of the other private schools in neighboring Barnstable. 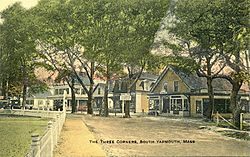 All content from Kiddle encyclopedia articles (including the article images and facts) can be freely used under Attribution-ShareAlike license, unless stated otherwise. Cite this article:
Yarmouth, Massachusetts Facts for Kids. Kiddle Encyclopedia.