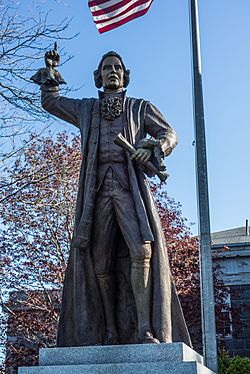 Bronze sculpture of James Otis Jr. in front of the Barnstable County Courthouse

James Otis Jr. (February 5, 1725 – May 23, 1783) was a lawyer in colonial Massachusetts, a member of the Massachusetts provincial assembly, and an early advocate of the Patriot views against British policy that led to the American Revolution. His catchphrase "Taxation without representation is tyranny" became the basic Patriot position.

All content from Kiddle encyclopedia articles (including the article images and facts) can be freely used under Attribution-ShareAlike license, unless stated otherwise. Cite this article:
James Otis Jr. Facts for Kids. Kiddle Encyclopedia.