Originally settled by the Nauset tribe, Eastham was the site where in 1620 a hunting expedition landed, comprised from the crew of the sailing vessel Mayflower, which had stopped in Provincetown harbor on Cape Cod Bay after a rough crossing of the Atlantic Ocean, which led to the first encounter of the Pilgrims and the local Nauset people at First Encounter Beach. The area would not be settled by Europeans, however, until 1644. The original lands included what are now the towns of Truro, Wellfleet, Eastham, Orleans and a small portion of Chatham. Eastham town was officially incorporated in 1651.

Eastham is the birthplace of Freeman Hatch, who in 1853 set the world record for a single-hull wooden sailing vessel from San Francisco around Cape Horn to Boston aboard the clipper ship Northern Light. Fishing and especially farming were early industries in the town, and writers and artists also came to the town. Gustavus Franklin Swift, born in Sagamore, MA, began his first meatpacking business in Eastham which later moved to Brighton, MA, Albany, NY, and eventually started the meatpacking industry in Chicago. It was in Eastham that Henry Beston wrote The Outermost House. The town is discussed at some length in Henry David Thoreau's Cape Cod as the somewhat rugged site of one of New England's largest summer "camp-meeting" evangelistic gatherings in the mid-19th century. The gatherings were at times attended by at least "one hundred and fifty ministers, (!) and five thousand hearers" at a site called Millennium Grove, in the northwest part of town. (The area is now a residential neighborhood, the only reminder being Millennium Lane.)

Today, Eastham is mostly known as the "Gate" to the Cape Cod National Seashore, which was founded in 1961 by President John F. Kennedy to protect Cape Cod's coast from erosion and overpopulation. The town is the site of many beaches, both on the Atlantic and bay sides, as well as the Nauset Light, which was moved to the town in 1923 from its old location in Chatham, and the Three Sisters Lighthouses, which have since been moved away from their now-eroded perches on the coast to a field just west of Nauset Light.

According to the United States Census Bureau, the town has a total area of 25.7 square miles (66.6 km2), of which 14.0 square miles (36.2 km2) is land and 11.7 square miles (30.4 km2), or 45.68%, is water. It is bordered by Cape Cod Bay and the Atlantic Ocean on its western and eastern sides, respectively. Eastham is also bordered by the towns of Wellfleet and Orleans on its northern and southern sides, respectively. Eastham is located on the "forearm" of Cape Cod, and is 23 miles (37 km) south of Provincetown, the same distance east-northeast of Barnstable, 38 miles (61 km) east of the Sagamore Bridge, and 92 miles (148 km) (by land) southeast of Boston.

Approximately one-third of the town is located within the Cape Cod National Seashore. There are several freshwater ponds near the center of town, the largest being called Great Pond, which has two public beaches. Powerboats with 50 and under horsepower motors are allowed on Great Pond and Herring Pond, with water skiing only permitted at Great Pond on even numbered days. Along the Atlantic coast, portions of the CCNS include several islands, divided by channels which lead from Nauset Bay and Salt Pond Bay to the ocean. The town also shares Town Cove with neighboring Orleans. Several creeks and the Herring River run inland from the bay side.

U.S. Route 6 passes from south to north through the town. The Cape Cod Rail Trail, as well as several other bicycle routes, pass through the town. There is no rail or air service in town; the nearest regional air service is at the Chatham Municipal Airport, though better and more regularly scheduled air service between the Cape and Boston can be found in Provincetown and Hyannis through Cape Air, and the nearest national and international air service can be found at Logan International Airport in Boston. Eastham is also served by an inexpensive regional bus service, The Flex. 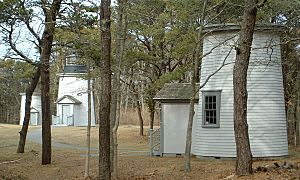 There were 2,396 households out of which 21.9% had children under the age of 18 living with them, 55.0% were married couples living together, 9.9% had a female householder with no husband present, and 31.8% were non-families. 25.5% of all households were made up of individuals and 12.4% had someone living alone who was 65 years of age or older. The average household size was 2.24 and the average family size was 2.66. 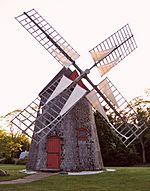 Eastham is home to a number of sites that are listed on the National Register of Historic Places. The Eastham Center Historic District, located near Town Hall, is the site of the Eastham Windmill, the oldest windmill on Cape Cod. Another registered historic place, Nauset Light, is located on the grounds of the Cape Cod National Seashore. The Edward Penniman House and barn, a retired whaling captain's home, is located near Fort Hill.

Eastham is the home to three museums maintained by the Eastham Historical Society, the 1869 Schoolhouse Museum, located on Route 6, opposite the National Seashore Center, the 1741 Swift-Daley House, the Antique Tool Museum and the Dill Beach Shack, all on Route 6, adjacent to the Eastham Post Office. The museums are opened in July and August.

All content from Kiddle encyclopedia articles (including the article images and facts) can be freely used under Attribution-ShareAlike license, unless stated otherwise. Cite this article:
Eastham, Massachusetts Facts for Kids. Kiddle Encyclopedia.