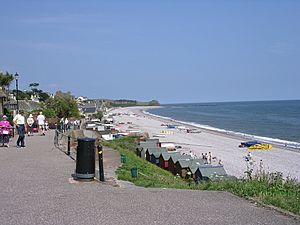 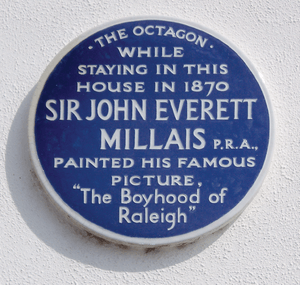 Budleigh Salterton is a small town on the coast in East Devon, England, 15 miles south-east of Exeter. It is situated within the East Devon Area of Outstanding Natural Beauty. It is a major part of the electoral ward of Budleigh. The ward population at the 2011 census was 5,967.

Budleigh Salterton lies at the mouth of the River Otter, where the estuary forms an area of reed bed and grazing marsh: an important haven for migratory birds and a Site of Special Scientific Interest for those interested in bird watching. It has a designated area for naturists.

Budleigh Salterton lies on the South West Coast Path, with clifftop routes eastwards to Sidmouth and westwards to Exmouth. The pebble beach and cliffs are part of the Jurassic Coast World Heritage site.

Fairlynch Museum is housed in a listed, thatched marine cottage orné dating from 1811. It covers the history and geology of the region, and opened in 1967, offering exhibitions and a local archive. It possesses a large collection of period costumes. The town has a male-voice choir, which performs for charity.

Budleigh Salterton lies on the B3178 and the B3179 ends on the western edge of the town. It is served by three bus routes: The Coasthopper 157 (hourly) to towns Exmouth and Sidmouth, the 357 (hourly to Exmouth, also forming the local town service), the 58 every two hours to Exeter and the 57C (one journey each way) to Exeter and Bicton College. Between 1897 and 1967, Budleigh Salterton was served by a station on the Budleigh Salterton Railway, a line built and operated by the London & South Western Railway, which ran from Tipton St Johns to Exmouth, which is now the nearest railway station (8 km).

In 2003, Budleigh Salterton featured in episode 3 of series 3 of Top Gear as the destination for a road test by Jeremy Clarkson of a Bentley Continental GT.

All content from Kiddle encyclopedia articles (including the article images and facts) can be freely used under Attribution-ShareAlike license, unless stated otherwise. Cite this article:
Budleigh Salterton Facts for Kids. Kiddle Encyclopedia.