Chatham Lighthouse, known as Twin Lights prior to 1923, is a lighthouse in Chatham, Massachusetts, near the "elbow" of Cape Cod. The original station, close to the shore, was built in 1808 with two wooden towers that were replaced in 1841 in spite of questions as to why a single tower would not be adequate. In 1877, two new towers, made of cast iron rings, replaced those. One of the towers was moved to the Eastham area and became Nauset Light in 1923.

The station was established in 1808; it was the second light station on Cape Cod. To distinguish it from Highland Light, the first Cape Cod light, and to act as a range, twin octagonal 40-foot (12 m) wooden towers were built. They were on skids so that they could be moved to keep them in line with the entrance channel as it shifted. Samuel Nye was appointed as the first Keeper of the Chatham Lights by President Jefferson on October 7, 1808. The light had an interesting history afterwards.

Chatham Light was added to the National Register of Historic Places as Chatham Light Station on June 15, 1987, reference number 87001501.

The following individuals were the principal light keepers over the years. 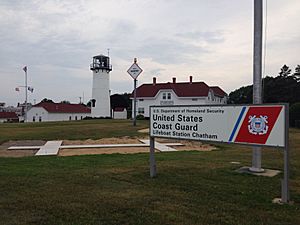 All content from Kiddle encyclopedia articles (including the article images and facts) can be freely used under Attribution-ShareAlike license, unless stated otherwise. Cite this article:
Chatham Light Facts for Kids. Kiddle Encyclopedia.