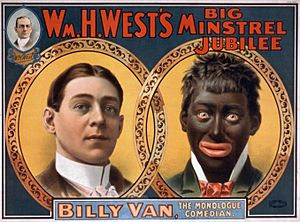 This reproduction of a 1900 William H. West minstrel show poster, originally published by the Strobridge Litho Co., shows the racist transformation from white to "black".

Blackface is a kind of costume or make up. Non-Black performers wear blackface so that they can represent racist images of a Black or Afrcan American person. Blackface became popular in the 19th century especially during Reconstruction after the American Civil War. It made racist stereotypes like the happy-go-lucky darky on a plantation more common.

Early in the 20th century, blackface came off the minstrel show. It became a form in its own right.

In the United States, blackface became less popular after the civil right movement.

It is generally considered highly offensive, disrespectful, and racist.

All content from Kiddle encyclopedia articles (including the article images and facts) can be freely used under Attribution-ShareAlike license, unless stated otherwise. Cite this article:
Blackface Facts for Kids. Kiddle Encyclopedia.