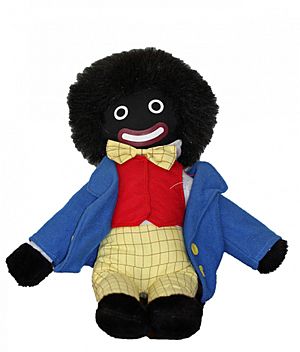 A Golliwog in the form of a child's soft toy 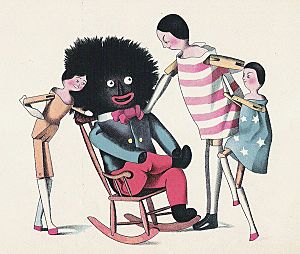 The golliwog, golliwogg or golly is a doll-like character – created by Florence Kate Upton – that appeared in children's books in the late 19th century, usually depicted as a type of rag doll. It was reproduced, both by commercial and hobby toy-makers, as a children's toy called the "golliwog", a portmanteau of golly and polliwog, and had great popularity in the UK and Australia into the 1970s. The doll is characterised by black skin, eyes rimmed in white, red lips and frizzy hair.

In the 21st century, the doll has become the subject of controversy. While some people see the doll as a symbol of childhood and an innocuous toy, it is considered as racist by others along with pickaninnies, minstrels, mammy figures, and other caricatures of black Africans.

Changing political attitudes with regard to race have reduced the popularity and sales of golliwogs as toys. Manufacturers who have used golliwogs as a motif (e.g. Robertson's marmalade in the UK) have either withdrawn them as an icon or changed the name. In particular, the association of the golliwog with the pejorative term "wog" has resulted in use of alternative names such as "golly" and "golly doll".

All content from Kiddle encyclopedia articles (including the article images and facts) can be freely used under Attribution-ShareAlike license, unless stated otherwise. Cite this article:
Golliwog Facts for Kids. Kiddle Encyclopedia.