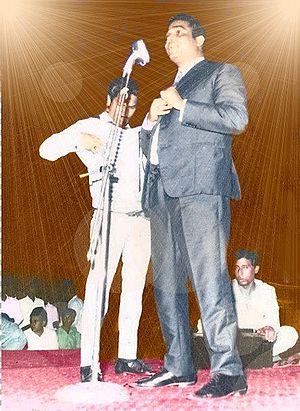 A playback singer is a singer whose singing is pre-recorded for use in movies. Playback singers record songs for soundtracks. The actors or actresses lip-sync the songs for cameras. The actual singer does not appear on screen.

South Asian movies produced in the Indian subcontinent are particularly known for using this technique. A majority of Indian movies as well as Pakistani movies typically include six or seven songs. Popular playback singers in India enjoy the same status as popular actors. Most of the playback singers are initially trained in classical music. Mohammed Rafi and Ahmed Rushdi are regarded as two of the most influential playback singers in South Asia.

Playback singing is not as common in contemporary Hollywood as musicals are less frequent. It was, however, more widely used in the past. Notable Hollywood performances include Marni Nixon in West Side Story for Natalie Wood's portrayal of Maria, in The King and I for Deborah Kerr's Anna Leonowens, and for Audrey Hepburn's Eliza in My Fair Lady; Bill Lee singing for John Kerr's Lieutenant Cable in South Pacific and for Christopher Plummer's Captain von Trapp in The Sound of Music, Lindsay Ridgeway for Ashley Peldon's character as Darla Dimple in the animated film Cats Don't Dance, Claudia Brücken providing the singing voice for Erika Heynatz's character as Elsa Lichtmann in L.A. Noire, and Betty Noyes singing for Debbie Reynolds in Singin' in the Rain, a movie in which playback singing is a major plot point.

All content from Kiddle encyclopedia articles (including the article images and facts) can be freely used under Attribution-ShareAlike license, unless stated otherwise. Cite this article:
Playback singer Facts for Kids. Kiddle Encyclopedia.