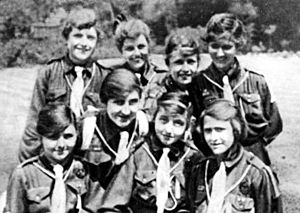 A Girl Guide Company in the United Kingdom, 1918 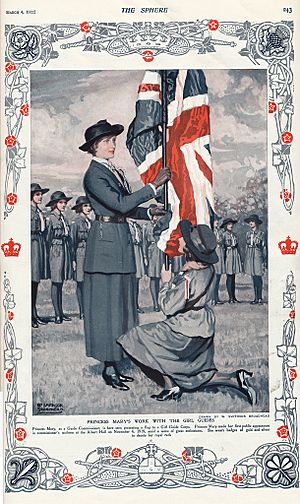 Girl Guides or Girl Scouts (as known in the United States) is a movement found worldwide, which was originally and still largely designed for girls and women only. This organisation was introduced in 1909, because girls demanded to take part in the then grassroots Boy Scout Movement.

In different places around the world, the movement developed in diverse ways. In some places, girls joined or attempted to join Scouting organisations. In other places, girls' groups were started independently, some of them later opening up to boys or merging with boys' organisations. In other instances, mixed groups were formed, sometimes to later split. In the same way, the name Girl Guide or Girl Scout has been used by groups at different times and in different places, with some groups changing from one to another.

The World Association of Girl Guides and Girl Scouts (WAGGGS) was formed in 1928 and has member organisations in 145 countries. There are now more than 10 million members worldwide. WAGGGS celebrated the centenary of the international Girl Guiding and Girl Scouting Movement over three years, from 2010 to 2012.

Lieutenant-General Robert Baden-Powell was a British soldier during the Second Anglo-Boer War in South Africa (1899–1902). He was the commander during the Siege of Mafeking, and noted during the siege how young boys made themselves useful by carrying messages for the soldiers. When he came home, he decided to put his Scouting ideas into practice to see if they would work for young boys, and took 21 boys camping on Brownsea Island, near Poole in Dorset. The camp was a success, and subsequently Baden-Powell wrote the book Scouting for Boys. The book covered topics such as tracking, signalling, and cooking, and it outlined a Scout method for an "instruction in good citizenship". Soon boys began to organise themselves into Patrols and Troops and calling themselves "Boy Scouts". Girls bought the book as well and formed themselves into Patrols of Girl Scouts, while some girls and boys formed mixed Patrols.

In those days, for girls to camp and hike was not common, as shown by this excerpt from The Boy Scouts Headquarters Gazette of 1909: "If a girl is not allowed to run, or even hurry, to swim, ride a bike, or raise her arms above her head, how can she become a Scout?" Nevertheless, Girl Scouts were registered at Scout Headquarters. In 1909 there was a Boy Scout rally at Crystal Palace in London. Among the thousands of Boy Scouts at the rally were several hundred Girl Scouts, including a group of girls from Peckham Rye who had no tickets. They asked Baden-Powell to let them join in. Following negative publicity in "The Spectator" magazine Baden-Powell decided that a separate single-sex organisation would be best. Baden-Powell asked his sister, Agnes Baden-Powell, to form a separate Girl Guides organisation. In 1910 The Girl Guides were officially formed in the United Kingdom. The first Guide Company to be registered was 1st Pinkneys Green Guides (Miss Baden-Powell's Own), who still exist in Pinkneys Green, Maidenhead, Berkshire. Many, though by no means all, Girl Guide and Girl Scout groups across the globe trace their roots to this point.

Baden-Powell chose the name "Guides" from a regiment in the British Indian Army, the Corps of Guides, which served on the Northwest Frontier and was noted for its skills in tracking and survival. In some countries, the girls preferred to remain or call themselves "Girl Scouts".

Other influential women in the history of the movement were Juliette Gordon Low, founder of the Girl Scouts of the USA, Olga Drahonowska-Małkowska in Poland and Antoinette Butte in France. 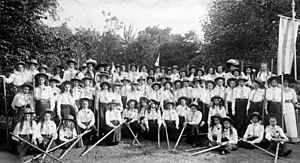 The Guide International Service (G.I.S.) was an organisation set up by the Girl Guides Association in Britain in 1942. Their aim was to send teams of adult Girl Guides to Europe after World War II to aid with relief work. It is described in two books: All Things Uncertain by Phyllis Stewart Brown and Guides Can Do Anything by Nancy Eastick. A total of 198 Guiders and 60 Scouts, drawn from Britain, Australia, Canada, Ireland and Kenya, served in teams. Some went to relieve the Bergen-Belsen displaced persons camp, while others served in Malaya.

Things that are shared amongst all Guide Units are:

Two central themes have been present from the earliest days of the movement: domestic skills and "a kind of practical feminism which embodies physical fitness, survival skills, camping, citizenship training, and career preparation". These two themes have been emphasized differently at different times and by different groups, but have remained central to Girl Guiding and Girl Scouting.

Individual national or other emblems may be found on the individual country's Scouting article.

The uniform is a specific characteristic of all Scouting movements. Robert Baden-Powell said it "hides all differences of social standing in a country and makes for equality; but, more important still, it covers differences of country and race and creed, and makes all feel that they are members with one another of the one great brotherhood".

In the 1909 The Scheme for Girl Guides, the uniform for the newly emerging movement was given as:

Guide uniforms vary according to cultures, climates and the activities undertaken. They are often adorned with badges indicating a Guide's achievements and responsibilities. In some places, uniforms are manufactured and distributed by approved companies and the local Guiding organisation. In other places, members make uniforms themselves.

All content from Kiddle encyclopedia articles (including the article images and facts) can be freely used under Attribution-ShareAlike license, unless stated otherwise. Cite this article:
Girl Guides Facts for Kids. Kiddle Encyclopedia.