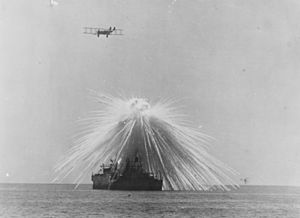 White phosphorus is an incendiary weapon. It makes a bright light and smoke. Its main ingredient is one of the allotropes of the chemical element phosphorus. White phosphorus is toxic to humans. It can burn deep into soft tissue, it can be breathed in, or it can be ingested (eaten). Over time, these can cause death.

The use of incendiary weapons against civilians is forbidden since 1949. They were used by U.S. forces in Iraq in 2004. White phosphorous was also used for smoke cover by the Israeli Army during Operation Cast Lead in the Gaza Strip during the 2008-2009 war between Israel and Hamas.

All content from Kiddle encyclopedia articles (including the article images and facts) can be freely used under Attribution-ShareAlike license, unless stated otherwise. Cite this article:
White phosphorus Facts for Kids. Kiddle Encyclopedia.