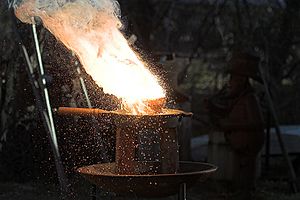 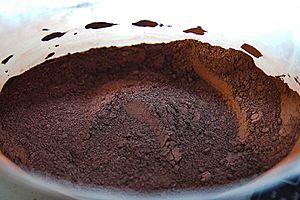 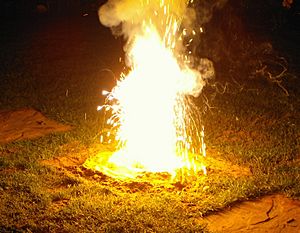 Thermite is an incendiary mixture. It is not an explosive material, but can burn very fast and very hot.

The reaction for an aluminium-iron(III) oxide thermite is this:

Contrary to popular opinion, metals can burn. Common metals need to be powdered, though, or they will conduct the heat away too fast to start a fire.

The thermite (thermit) reaction was discovered in 1893. German chemist Hans Goldschmidt patented it in 1895. People called it the "Goldschmidt reaction" or "Goldschmidt process". Goldschmidt was trying to make very pure metals without the use of carbon in smelting. He soon discovered the value of thermite in welding. It started to be used in the early 1900's to weld train tracks.

Thermite was used in the military as an incendiary weapon. It is mainly used to destroy buildings and equipment as it melts the metal easily. Barium nitrate can be added to thermite to make an easier-burning mixture. Especially during World War II, militaries dropped thousands of bombs containing thermite on cities, starting fires everywhere.

Thermite is not safe to make at home. It releases ultraviolet light which can damage the eyes. It also makes a very hot flame that can melt iron. It is extremely difficult to extinguish. Streams of molten iron can flow out of a thermite mixture, igniting everything it touches. Some metals can boil and burst into flames when placed in thermite, such as zinc. If it is preheated then ignited, thermite can burn very fast, releasing a huge amount of heat and light. If it is dropped in water it can boil water very fast, making an explosion. Dropping it on ice can make the ice explode, however it is safe to drop it into a three liter beaker filled with lightly moist sand.

All content from Kiddle encyclopedia articles (including the article images and facts) can be freely used under Attribution-ShareAlike license, unless stated otherwise. Cite this article:
Thermite Facts for Kids. Kiddle Encyclopedia.