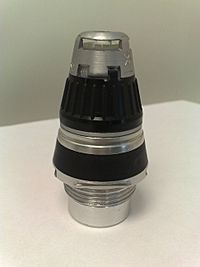 In military munitions, a fuze is the part of an explosive device that makes it explode. In some devices (notably torpedoes) a fuze may be identified by function as the "exploder". The term fuze is used to indicate an advanced device with mechanical and/or electronic parts.

Time fuzes detonate after a set period of time. Impact, or contact fuzes detonate when they hit something, usually the target. A proximity fuze uses sensors which can be one or more combinations of the following: radar, active sonar, passive acoustic, infrared, magnetic, photoelectric, seismic or even television cameras. Whatever the sensor used, percussion fuzes cause the explosion to occur close to the target. The target will either be destroyed or severely damaged.

Most English-language countries use the "z" spelling to distinguish between simple burning fuses and pyrotechnical or explosive devices.

All content from Kiddle encyclopedia articles (including the article images and facts) can be freely used under Attribution-ShareAlike license, unless stated otherwise. Cite this article:
Fuze Facts for Kids. Kiddle Encyclopedia.