Northern Ontario is a primary geographic and administrative region of the Canadian province of Ontario; the other primary region being Southern Ontario. The geographic region lies north of Lake Huron (including Georgian Bay), the French River, Lake Nipissing, and the Mattawa River, while the administrative region has several boundaries further south that vary according to federal and provincial government policies and requirements, such as a part of Nipissing District that lies south of the Mattawa River. Ontario government departments and agencies such as the Growth Plan for Northern Ontario and the Northern Ontario Heritage Fund Corporation define Northern Ontario as all areas north of, and including, the districts of Parry Sound and Nipissing.

The geographic region has a land area of 802,000 km2 (310,000 mi2) and constitutes 87 per cent of the land area of Ontario, but with just 730,000 people it contains only about six per cent of the province's population. Most of Northern Ontario is situated on the Canadian Shield, a vast rocky plateau. The climate is characterized by extremes of temperature, extremely cold in winter and hot in summer. The principal industries are mining, forestry, and hydroelectricity.

In the early 20th century, Northern Ontario was often called "New Ontario", although this name fell into disuse because of its colonial connotations. (In French, however, the region may still be referred to as Nouvel Ontario, although le Nord de l'Ontario and Ontario-Nord are also used.)

Those areas which formed part of New France in the pays d'en haut, essentially the watersheds of the Ottawa River, Lake Huron and Lake Superior, had been acquired by the British by the Treaty of Paris (1763) and became part of Upper Canada in 1791, and then the Province of Canada between 1840 and 1867. 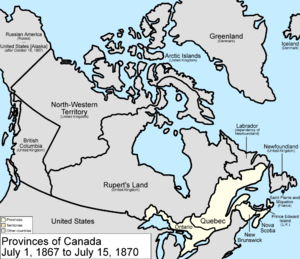 At the time of Canadian Confederation in 1867, the portion of Northern Ontario lying south of the Laurentian Divide was part of Ontario, while the portion north of the divide was part of the separate British territory of Rupert's Land. The province's boundaries were provisionally expanded northward and westward in 1874, while the Lake of the Woods region remained subject to a boundary dispute between Ontario and Manitoba. The region was confirmed as belonging to Ontario by decision of the Judicial Committee of the Privy Council in 1884, and confirmed by the Canada (Ontario Boundary) Act, 1889 of the Parliament of the United Kingdom, which set the province's new northern boundary at the Albany River.

The remaining northernmost portion of the province, from the Albany River to Hudson Bay, was transferred to the province from the Northwest Territories by the Parliament of Canada in the Ontario Boundaries Extension Act, 1912. This region was originally established as the District of Patricia, but was merged into the Kenora District in 1927. 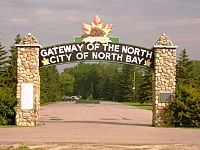 Northern Ontario has nine cities. In order of population (2016), they are:

Smaller municipalities in Northern Ontario include:

Outdoor recreation is popular in the region year-round. In summer, fishing, boating, canoeing, ATVing, and camping are enjoyed by residents. Hunting remains popular in autumn, especially for moose, whitetail deer, and grouse, although goose hunting is exceptionally popular near James Bay. Group hunting for moose is a favourite social outing. In winter, snowmobiling, ice fishing, outdoor shinny, cross-country skiing, and snowshoeing are popular activities. The region boasts extensive snowmobiling trails and many lakes are dotted with ice hut villages throughout the winter.

The region is home to numerous major cultural events, including Sudbury's La Nuit sur l'étang, Northern Lights Festival Boréal and Cinéfest, the Festival of the Sound in Parry Sound and the Red Rock Folk Festival in Red Rock. Many communities host festivals celebrating local ethnic groups such as French, First Nations, Finnish, and Italian. Other communities have celebrations of unique local heritage such as Kapuskasing's Lumberjack Days, Mattawa's Voyageur Days, Sioux Lookout's Blueberry Festival, Elliot Lake's Uranium Heritage Days, and Red Lake's Norseman Festival. Even the smallest First Nations in the region will have an annual pow wow, which bring in many people from outside the community as well, although by far the largest and most famous powwow in the region is held in Wikwemikong on Manitoulin Island. In winter, many towns will host a winter carnival celebrating the cold weather; the largest of these is Sault Ste. Marie's Bon Soo Winter Carnival.

As of 2015, LGBT pride events take place in Sudbury, Thunder Bay, Sault Ste. Marie, Timmins, Elliot Lake and Kenora, and a committee is working toward the future launch of an event in North Bay.

There is no single regional culinary dish. Fish and wild game, such as walleye (pickerel) and moose, can be considered regional favourites. Roadside chip trucks are popular choices for meals for locals and tourists alike, and almost every community has at least one. Italian cuisine has had an influence on the culture of Northeastern Ontario, with porchetta considered a culinary signature of Sudbury and Sault Ste. Marie, while Thunder Bay's food culture is distinctively Finnish, with the Hoito restaurant known internationally for its Finnish-style pancakes and other traditional Finnish dishes.

Since the demise of Northern Breweries, formerly the region's primary local brewery, in 2006, several new local craft brewers have emerged in the region, including Stack Brewing in Sudbury, OutSpoken Brewing in Sault Ste. Marie, Sleeping Giant Brewing in Thunder Bay, Lake of the Woods Brewing in Kenora, Manitoulin Brewing in Little Current and New Ontario Brewing Company in North Bay

The mining boom of the early twentieth century attracted many francophones to Northeastern Ontario, and French is still widely spoken there. While the Canadian constitution never required the province of Ontario to recognize French as an official language, the government provides full services in the French language to any citizen, resident, or visitor wishing it including communications, schools, hospitals, social services, and in the courts, under the French Language Services Act of 1986. Bilingualism is higher than the Canadian average – in 2011, 180,020 people, or 24.6% of the population, spoke both English and French. There were also 8,910 people, or 1.2% of the population, who only spoke French. All of Northeastern Ontario, with the sole exception of Manitoulin Island, is designated as a French language service area, as are a few individual municipalities in the Northwest. The government of Canada provides French and English equally in all matters. In 2011, 10.2% of people in Northern Ontario spoke French most often at home, mostly in Northeastern Ontario.

The 2011 Canadian Census found that the population of Northern Ontario was 732,914. However, this data does not include 17 incompletely enumerated Indian Reserves across the region. Four reserves were not counted due to permission not being given, and another 13 in Northwestern Ontario were not counted due to evacuations caused by forest fires. The latest census figures for these reserves show a total population of 11,435, which means that the total population for the region is closer to 744,349. The median age for Northern Ontario in 2011 was 43.9. There were 43,670 immigrants in 2011, representing 5.8% of the population, down from 6.8% in 2006.

The region also has a significant First Nations population, primarily of the Ojibwe, Cree and Oji-Cree nations, with smaller communities of Nipissing, Algonquin, Odawa and Saulteaux.

The languages that had at least 1,000 native speakers (single mother-tongue response) in Northern Ontario in 2006 were:

Religion in Northern Ontario at the 2001 census

Television series The Red Green Show (1991–2005) and its spinoff theatrical film Duct Tape Forever (2002) are set in the fictional town of Possum Lake. The animated sitcom Chilly Beach (2003–2008, CBC), set in a fictional town of unspecified location in Northern Canada, was produced in Sudbury.

In the comic strip For Better or For Worse, Elizabeth Patterson attended North Bay's Nipissing University, and subsequently taught school in the fictional reserve of Mtigwaki on Lake Nipigon. Lynn Johnston, the strip's cartoonist, lives in Corbeil, near North Bay in real life, although the strip is set primarily in Southern Ontario.

All content from Kiddle encyclopedia articles (including the article images and facts) can be freely used under Attribution-ShareAlike license, unless stated otherwise. Cite this article:
Northern Ontario Facts for Kids. Kiddle Encyclopedia.