The Albany River is a river in Northern Ontario, Canada, which flows northeast from Lake St. Joseph in Northwestern Ontario and empties into James Bay. It is 982 kilometres (610 mi) long to the head of the Cat River (a tributary of Lake St. Joseph), tying it with the Severn River for the title of longest river in Ontario. Major tributaries include the Kenogami River and Ogoki River.

The river was named after James, Duke of York and Albany, who later became King James II of England.

The river begins at Lake St. Joseph at an elevation of 371 metres (1,217 ft). and flows over the Rat Rapids dam and under Ontario Highway 599 into Osnaburgh Lake. From there it flows via a Main Channel (northern) and South Channel around Kagami Island northeast, and takes in the right tributary Misehkow River and left tributary Etowamami River. The river continues over the Upper Eskakwa Falls, takes in the right tributary Shabuskwia River, and travels over the Eskakwa Falls and Snake Falls.

The river empties into the Akimiski Strait on James Bay via a series of channels. The community of Fort Albany lies on a southern channel and the Kashechewan First Nation on a northern one.

This river drains an area of 135,200 square kilometres (52,201 sq mi) and has a mean discharge of 1,420 cubic metres (50,147 cu ft) per second. For much of its length, the river defines the boundary between Kenora District and Thunder Bay & Cochrane Districts.

There are three diversions in the Albany River watershed, all diverting water from the James Bay drainage basin and all undertaken as part of hydroelectric projects. Two divert water into Lake Superior in the Great Lakes Basin: the Ogoki River has been diverted via Lake Nipigon and the Nipigon River (Long Lake Diversion, a diversion of 4,273 cubic feet (121.0 m3) per second); and the headwaters of the Kenogami River have been diverted via Long Lake and the Aguasabon River (diversion of 1,377 cubic feet (39.0 m3) per second). The third diverts the waters of Lake St. Joseph via the English River and Nelson River into Hudson Bay (diversion of 3,072 cubic feet (87.0 m3) per second). 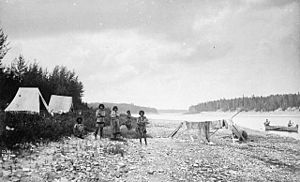 A First Nations encampment beside the Albany River, 1886

Since the Albany extends far to the west, its mouth is a natural site for a trading post. See Canadian Canoe Routes (early). Trade in the area was long contested by the English from Hudson Bay and the French on the Great Lakes. Much of the Albany basin was visited by coureurs des bois long before the English penetrated inland. In 1674 Charles Bayly of the Hudson's Bay Company became the first European to see the Albany. Sometime before 1679 the HBC founded Fort Albany, Ontario at the mouth of the river. In 1685 the French built Fort des Français at the future site of Henley House. In 1743 Henley House was established 160 miles upriver at the mouth of the Kenogami River. In 1775-76 Edward Jarvis from Henley House explored the relation between the Kenogami and the Missinaibi Rivers and went down to Michipicoten on Lake Superior. In 1777 Glouster House was built 243 miles above Henley House on Upashewey Lake. In 1779 Philip Turnor surveyed as far as Gloucester House. In 1786 Osnaburgh House was built near the outlet of Lake St. Joseph. By 1790 or so the Fort Albany trade extended all the way to Lake Winnipeg.

The land north of the Albany River was part of the Northwest Territories until 1912, when it was transferred to Ontario in the Ontario Boundaries Extension Act, 1912.

A provincial waterway park has been established on the river north of Wabakimi Provincial Park. 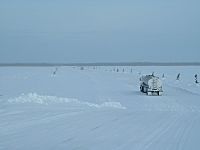 All content from Kiddle encyclopedia articles (including the article images and facts) can be freely used under Attribution-ShareAlike license, unless stated otherwise. Cite this article:
Albany River Facts for Kids. Kiddle Encyclopedia.