Kids Encyclopedia Facts
This page is about a city in Northwestern Ontario, Canada. For other uses, see Kenora (disambiguation).
"Rat Portage" redirects here. For the nearby Obashkaandagaang Bay First Nation reserve, see Rat Portage 38A, Ontario.

Kenora, originally named Rat Portage (French: Portage-aux-Rats), is a small city situated on the Lake of the Woods in Northwestern Ontario, Canada, close to the Manitoba boundary, and about 200 km (124 mi) east of Winnipeg. It is the seat of Kenora District.

Kenora is the administrative headquarters of the Anishinabe of Wauzhushk Onigum, Obashkaandagaang Bay, and Washagamis Bay First Nation band governments.

The name "Kenora" was coined by combining the first two letters of Keewatin, Norman and Rat Portage.

Kenora's future site was in the territory of the Ojibway when the first European, Jacques De Noyon, sighted Lake of the Woods in 1688.

Pierre La Vérendrye established a secure French trading post, Fort St. Charles, to the south of present-day Kenora near the current Canada/U.S. border in 1732, and France maintained the post until 1763 when it lost the territory to the British in the Seven Years' War — until then, it was the most northwesterly settlement of New France. In 1836 the Hudson's Bay Company established a post on Old Fort Island, and in 1861, the Company opened a post on the mainland at Kenora's current location.

In 1878, the company surveyed lots for the permanent settlement of Rat Portage ("portage to the country of the muskrat") — the community kept that name until 1905, when it was renamed Kenora. 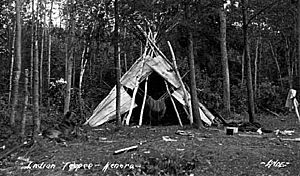 Kenora was once claimed as part of the Province of Manitoba, and there are early references to Rat Portage, Manitoba. There was a long lasting argument between the two provinces known as the Ontario-Manitoba boundary dispute. Each province claimed the town as part of their territory and the dispute lasted from 1870 to 1884. Although Ottawa had ruled the town part of Manitoba in 1881, the issue was finally taken up with the Judicial Committee of the Privy Council which eventually decided in Ontario's favour. Kenora officially became part of the province of Ontario in 1889. Boundaries were drawn up for the provinces and the Northwest Angle on Lake of the Woods which definitively drew the borders between Ontario, Manitoba, Canada, and Minnesota, U.S.A.

Gold and the railroad were both important in the community's early history: gold was first discovered in the area in 1850, and by 1893, 20 mines were operating within 24 km (15 mi) of Rat Portage, and the first Canadian ocean-to-ocean train passed through in 1886 on the Canadian Pacific Railway. Among the entrepreneurs attracted to the town was the Hon. JEP Vereker, a retired British army officer and youngest son of the 4th Viscount Gort.

Later, a highway was built through Kenora in 1932, becoming part of Canada's first coast-to-coast highway in 1943, and then part of the Trans-Canada Highway, placing the community on both of Canada's major transcontinental transportation routes. The original barrier to the completion of the highway concerned the crossing of the Winnipeg River at two locations. The single span arch bridges are among the longest of their type in North America.

During the Prohibition era in the United States, the Lake of the Woods served as a smuggler's route for the transport of alcohol.

In December 1883, there was a large fire in Rat Portage, rendering 70 of the town's then population of 700 homeless.

The Stanley Cup was won by the Kenora Thistles hockey team in 1907. The team featured such Hall of Famers as Billy McGimsie, Tommy Phillips, Roxy Beaudro, and Art Ross, for whom the Art Ross Trophy is named. Kenora is the smallest town to have won a major North American sports title. 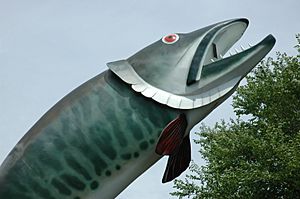 In 1967, the year of the Canadian Centennial, Kenora erected a sculpture known as Husky the Muskie. It has become the town's mascot and one of its most recognizable features.

A dramatic bank robbery took place in Kenora on May 10, 1973. An unknown man entered the Canadian Imperial Bank of Commerce heavily armed and wearing a "dead man's switch", a device utilising a clothespin, wires, battery and dynamite, where the user holds the clothespin in the mouth, exerting force on the clothespin. Should the user release the clothespin, two wires attached to both sides of the pin complete an electrical circuit, sending current from the battery, detonating the explosives. After robbing the bank, the robber exited the CIBC, and was preparing to enter a city vehicle driven by undercover police officer Don Milliard. A sniper, Robert Letain, positioned across the street, shot the robber, causing the explosives to detonate and kill the robber. Most of the windows on the shops on the main street were shattered as a result of the blast. Recently, Kenora Police submitted DNA samples from the robber's remains to a national database to identify him; however, the suspect was never positively identified.

The importance of the logging industry declined in the second part of the 20th century, and the last log boom was towed into Kenora in 1985. The tourist and recreation industries have become more important.

In addition to the formerly separate towns of Keewatin and Jaffray Melick, the city also includes the neighbourhoods of Norman, Rabbit Lake, Rideout, Pinecrest, Minto and Lakeside. 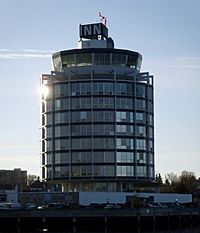 The city's most prominent cultural venue is the downtown Harbourfront, a park on the shore of Lake of the Woods which hosts the city's annual winter and summer festivals, as well as concert series, and other special events.

The city's downtown core has a public arts project, with 20 murals depicting the region's history painted on buildings in the business district.

The city is home to a major international bass fishing tournament.

Kenora is sometimes stereotyped as an archetypal hoser community, evidenced by the phrase "Kenora dinner jacket" as a nickname for a hoser's flannel shirt.

The City of Kenora is home to the Lake of the Woods Museum, which has won awards from the Ontario Historical Society and the Ontario Museum Association for its exhibits and programming. It was called "one of the coolest little museums in Canada" by the CAA. In June 2011, the Museum was recognized by the Ontario Historical Society for its exhibit, Bakaan nake'ii ngii-izhi-gakinoo'amaagoomin (We Were Taught Differently): The Indian Residential School Experience, based on stories of residential school life told by local residents. Most recently the museum in 2012 the museum was awarded the 2012 Ontario Museum Association Award of Excellence in Special Projects for its work on the IPad based "mobile tour".

All content from Kiddle encyclopedia articles (including the article images and facts) can be freely used under Attribution-ShareAlike license, unless stated otherwise. Cite this article:
Kenora Facts for Kids. Kiddle Encyclopedia.