Kids Encyclopedia Facts
This page is about the city in Ontario, Canada. For other uses, see Timmins (disambiguation).

Timmins is a city in northeastern Ontario, Canada on the Mattagami River. The city has a population of 41,788 (2016). The city's economy is based on natural resource extraction and is supported by industries related to lumbering and to the mining of gold, zinc, copper, nickel, and silver.

As the fourth-largest city in the Northeastern Ontario region, Timmins also serves as a regional service and distribution centre. The city has a large Francophone community, with more than 50 percent bilingual in French. 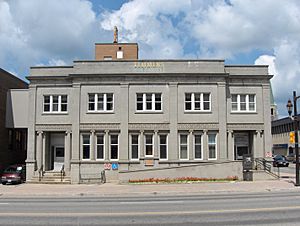 Research performed by archaeologists indicate that human settlement in the area is at least 6,000 years old; it's believed the oldest traces found are from a nomadic people of the Shield Archaic culture.

Up until contact with settlers, the land belonged to the Mattagami First Nation peoples. Treaty Number Nine of 1906 pushed this tribe to the north side of the Mattagami Lake, the site of a Hudson's Bay trading post first established in 1794. In the 1950s, the reservation was relocated to the south side of the lake, to its present-day reservation.

The development of Timmins is due to the rich ore deposits of the Canadian Shield. Originally a company town, it was founded by Noah Timmins in 1912 following gold discoveries in the Porcupine Camp a few years earlier.

On June 9, 1909, Harry Preston slipped on a rocky knoll and the heels of his boots stripped the moss to reveal a large vein of gold, which later became the Dome Mine. Benny Hollinger discovered the nearby Hollinger Gold Mine in 1910. Noah and Henry Timmins bought into the Hollinger Mine shortly after. On the same day as the Hollinger discovery, Sandy McIntyre discovered the McIntyre Mine near Pearl Lake, four miles away. These mines are known as the "Big Three."

The area became home to dozens of prospectors during the "Porcupine Gold Rush," who explored the areas around Porcupine Lake and the Frederick House River. Most settlers grouped around Porcupine Lake and the Dome, which is situated one mile from the lake. Four miles down the road, around the McIntyre Mine, the hamlet of Schumacher was established. Timmins apparently got its name from the wooden sign nailed to a tree, demarcating Noah Timmins's purchase.

The rail system that began to operate around Timmins in 1911 accelerated the growth of the camp. That same year, two days after the first train arrived in the Porcupine, the entire camp was destroyed in the fire of 1911, although the area was rebuilt within two months.

In 1912, Noah Timmins founded the town to house the employees of the Hollinger Mine.

In November 1912, 1,200 members of the Western Federation of Miners Local 145 held a strike at all three mines in response to a proposal to lower their wages. Mine operators hired gun thugs, who fired on the picket line and were ordered out by the provincial government. After months without work, many men chose to leave the settlement; only 500 miners returned to work in July 1913. The strike won the men a nine-hour workday and a pay increase.

The Great Depression did not adversely affect the economy of the area, and jobs were available in mining and lumber.

In 1917, a dam was built at Kenogamissi Falls, downriver from Mattagami Lake, to provide power for the Timmins-Porcupine mining camp; Mattagami Lake was consequently flooded.

The gold mines declined in the 1950s.

In 1973, 35 townships covering 1,260 square mile, including Porcupine, South Porcupine, Schumacher, and Timmins were organized into the City of Timmins.

In the 1990s, the City of Timmins became a regional service and distribution centre for Northeastern Ontario.

Timmins is near the northern periphery of the hemiboreal humid continental climate (Dfb). Timmins has very cold winters, being in northern Ontario, but temperatures in late summer and fall tend to be among the coldest for any major city in any Canadian province, although during the spring and summer it can get very hot. The highest temperature ever recorded in Timmins was 39.4 °C (103 °F) on 12 July 1936. The coldest temperature ever recorded was −45.6 °C (−50 °F) on 1 February 1962.

The 2006 census indicated that Timmins was 91.1% White, 7.7% Aboriginal, and 1.2% Visible Minorities. After several years of decline, the city's population has grown again, with an intercensal population estimate of 44,507 in 2008 and a rapid increase in new retail development projects in the city's west end. 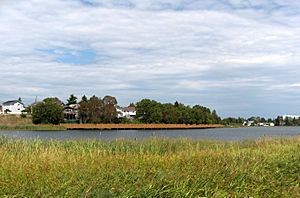 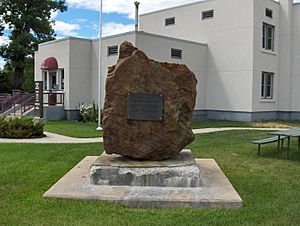 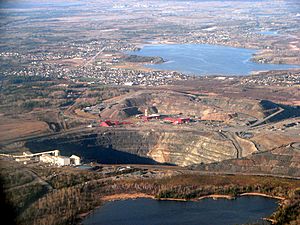 Specimen gold, probably from Pamour Mine

Hollinger Park is one of the city's main recreational spaces. The park is divided in two sections, the north side being the public park area, with the south side having a regulation sized baseball diamond and two soccer fields for more organized outdoor recreational endeavours. The baseball park has been home to the Timmins Men's Baseball League since 1985. Former Timmins resident Shania Twain played a concert at Hollinger Park on July 1, 1999. An estimated 22,000 people attended the outdoor concert.

The Pioneer Museum is located 39.5 km (24.5 mi) northeast of the city centre in Connaught, a community of 400 people. Nearby communities include Barbers Bay, Dugwal, Finn Road, Hoyle, Ice Chest Lake, McIntosh Springs and Nighthawk. Local history in the area dates back over 300 years.

The Porcupine Miner's Memorial tribute is a statue of the miner, head frame and tablets bearing the names of 594 miners killed in mining accidents were unveiled in 2008. The following year, the statues of a mother and two children were unveiled to commemorate those families left behind.

Timmins Murals painted by Ed Spehar, Gary Bostrom and Paulette Brozowski, three of our local and accomplished artists. Much of their work now graces the sides of buildings or is on display inside public buildings. These murals reflect the history of Timmins including the founders of the city. Murals are available for viewing at the McIntyre Community Centre, Hollinger Park, the Northern Tel Building, the Maurice Londry Community Centre, the CM Shields Library, Golden Avenue Public School, the Timmins Public Library, the Victor M. Power Timmins Airport and Theriault Catholic High School.

The Timmins Public Library was constructed in 2005 with locally manufactured products, using wood as the main structural material, making efficient use of our natural resources while reducing construction waste. The eco-friendly design was recognized by the Green Building Initiative and the building achieved a 3 Green Globes rating for its efficient use of resources and sustainable development.

All content from Kiddle encyclopedia articles (including the article images and facts) can be freely used under Attribution-ShareAlike license, unless stated otherwise. Cite this article:
Timmins Facts for Kids. Kiddle Encyclopedia.