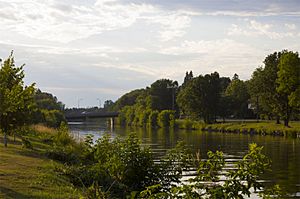 Temiskaming Shores is located along the southern edge of the Clay Belt area, near the Quebec border on the shores of Lake Timiskaming's Wabi Bay. The separate township municipality of Harris separates the city from the Ontario-Quebec border. The nearest town on the Quebec side of the border is Notre-Dame-du-Nord.

The city is located within the Timiskaming Graben, a smaller branch of the Ottawa-Bonnechere Graben. A large escarpment, known as Devil's Rock, is located near Haileybury.

The city includes the communities of New Liskeard, Haileybury, Dymond, and North Cobalt.

The Ottawa River, which drains into and out of Lake Timiskaming, has been a well-travelled route from the earliest times, and served as the initial point of access to the Temiskaming area. Native peoples travelled this route since the earliest times. Fort Temiscamingue was established in 1695 by French explorers. In 1794 George Gladman of the Hudson's Bay Company established Abitibi House on Lake Abitibi, to the north. In 1886, Alexander H. Telfer led a survey trip up Lake Timiskaming and gave a report to the Temiskaming Settlers' Association. By this time, the Quebec side of Lake Timiskaming was also being settled, and steamboats, the primary mode of transportation in the area, were ferrying new settlers into the area. 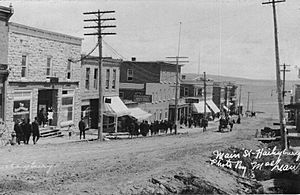 Before more settlements could be established, The Quebec - Ontario boundary north of Lake Timiskaming had to be accurately surveyed. Earlier surveys by Quebec and Ontario resulted in a boundary dispute, so the Canadian government sent a survey team to resolve the issue in 1890. William Ogilvie, who had recently distinguished himself by accurately surveying the Canada - Alaska boundary, led the expedition. A benchmark near Mattawa was used to establish an accurate benchmark north of Lake Timiskaming, using astronomical methods. From the head of Lake Timiskaming, they proceeded north to James Bay, fixing accurate positions of the provincial boundary at regular intervals using geodesy data derived from star transits. Ogilvie's journal describe conditions in this area and the early settlers he met. His report on this expedition describes the details of this expedition.

William Murray (1840–1906) and Irvin Heard (1871–1956) were the first European settlers in the New Liskeard area, arriving in 1891. Some years later Crown Lands Agent John Armstrong was dispatched to the area to oversee formal land settlement. The settlers founded a prosperous agricultural center, taking advantage of the rich soil in the Little Claybelt region. New Liskeard was founded soon after settlers began to arrive in Dymond, and the two towns were soon incorporated, in 1903 and 1901, respectively. John Armstrong served as New Liskeard's first mayor. His descendants still live in the area today. New Liskeard was named after Liskeard in Cornwall, England.

Haileybury was founded in 1889 by Charles Cobbold Farr, who named the newly founded town after the Haileybury and Imperial Service College, his former school in England. Haileybury was formally incorporated as a town in 1904. Farr encouraged settlement in the area, penning his own promotional pamphlet, entitled "The Lake Temiskamingue District", in an effort to attract new settlers to the region. Marketed to settlers as prime agricultural land, Haileybury had only a handful of residents until the arrival of the Temiskaming and Northern Ontario Railway in the early 1900s, and the subsequent discovery of large silver deposits in neighboring Cobalt in 1903. During the Cobalt Silver Rush, Haileybury became a 'bedroom community' that served the needs of the many miners and, most famously, many mine owners and managers. These mine managers and owners were responsible for the construction of the row of stately homes, nicknamed 'Millionaire's Row' that stretched along the waterfront on what is now Lakeshore Road, many of which still stand today. In 1909, the Haileybury Hockey Club played its first and only season in the NHA. The club was taken over and moved by Montreal's Club Antique-Canadien for the following season, and became the Montreal Canadiens. By 1912, Haileybury had been named the judicial seat for the Temiskaming Region, a title it retains to this day. The town of Haileybury annexed the neighbouring community of North Cobalt in 1971. 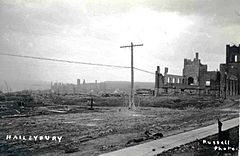 Haileybury after its destruction in the Great Fire of 1922.

The region was affected by the Great Fire of 1922, considered one of the worst disasters ever to befall the area. Haileybury suffered the worst damage, and approximately ninety percent of the town was destroyed, leaving only Millionaire's Row and a few other neighborhoods intact. The mass destruction is partially attributable to strong wind on the day of the fire. Approximately 3500 people were left homeless by the fire. As well, the area was affected by the 1935 Timiskaming earthquake, which had its epicentre at Lac Kipawa in Quebec, approximately halfway between the Haileybury/New Liskeard area and North Bay.

In more recent history, Dymond still functions largely as an agricultural centre, while the commercial and industrial interests in the area have mostly shifted operations to the former town of New Liskeard. Haileybury maintains its status as a judicial seat, and is also home to the new city hall. A strong link to agriculture means that Temiskaming Shores has largely avoided the boom-and-bust cycle typical of most mining- and forestry-dependent small towns, and has been able to maintain a stable population base with a healthy local economy. Temiskaming Shores has also become a popular retirement and recreational destination, with small retirement communities like the Bayport Village being developed in the former town of Haileybury.

A 65,000-square-foot (6,000 m2) building in Haileybury, built by area businessman Peter Grant as a combination home and office for his now-defunct company Grant Forest Products, was promoted as the largest house in Canada when Grant put it on the real estate market in 2010 for an asking price of $25 million.

Initially, as none of the old municipal office buildings was large enough to accommodate the expanded municipal staff of a single city, all three remained in use to house different city departments. A new city hall, located on Farr Drive in Haileybury, was completed in 2007.

Though now established as one legal city, Temiskaming Shores is not fully integrated geographically — there exists a noticeable demarcation between New Liskeard/Dymond and Haileybury/North Cobalt. The downtown areas of New Liskeard and Haileybury are separated by 8 km-long Lakeshore Road. For most of its length, this road lacks sidewalks, which makes it quite impractical to travel through the city without using a motor vehicle. The STATO Trail, now finished, is intended resolve this problem. The inaugural section was paved in early June 2008, and runs along the waterfront by City Hall.

City council has yet to approach Canada Post to have Temiskaming Shores recognized as a mailing address. Currently, mail is delivered to PO boxes and rural routes in the pre-amalgamation towns of New Liskeard (P0J 1P0), Haileybury (P0J 1K0), and North Cobalt (P0J 1R0).

Highway 11 and Highway 65 pass through the city. The primary arterial route through Haileybury and New Liskeard also formerly held the business route designation Highway 11B.

All content from Kiddle encyclopedia articles (including the article images and facts) can be freely used under Attribution-ShareAlike license, unless stated otherwise. Cite this article:
Temiskaming Shores Facts for Kids. Kiddle Encyclopedia.