Kids Encyclopedia Facts
Not to be confused with Liscard.

Liskeard ( LIH-skard; Cornish: Lyskerrys) is an ancient stannary and market town in south-east Cornwall, South West England. It is situated approximately 20 miles (32 km) west of Plymouth, 14 miles (23 km) west of the Devon border, and 12 miles (20 km) east of Bodmin. The Bodmin Moor lies to the north-west of the town. The total population of the town at the 2011 census was 11,366

The place name element Lis, along with ancient privileges accorded the town, indicates that the settlement was once a high status 'court'. A Norman castle was built here after the Conquest, which eventually fell into disuse in the later Middle Ages. By 1538 when visited by John Leland only a few insignificant remains were to be seen. Sir Richard Carew writing in 1602 concurred;

Liskeard was one of the 17 Antiqua maneria of the Duchy of Cornwall. The market charter was granted by Richard, Earl of Cornwall (brother of Henry III) in 1240. Since then, it has been an important centre for agriculture. The seal of the borough of Liskeard was Ar. a fleur-de-lis and perched thereon and respecting each other two birds in chief two annulets and in flank two feathers.

When Wilkie Collins wrote of his visit to the town in his Rambles Beyond Railways he had a low opinion of it: "that abomination of desolation, a large agricultural country town". The town went through a period of economic prosperity during the pre-20th century boom in tin mining, becoming a key centre in the industry as a location for a stannary and coinage.

Liskeard is one of the few towns in Cornwall still to have a regular livestock market, every other Tuesday. There is a range of restaurants, cafes and pubs in the town, and some shops retain their Victorian shopfronts and interiors.

Liskeard puts on a pantomime in the last week of January and holds a carnival every June. Every July, Liskeard holds a large agricultural show, The Liskeard Show, which is always held on the second Saturday in July. St Matthew's Fair was originally established by charter in 1266, the fair was re-established in 1976 which runs in September/October. Every December, there is street entertainment and a lantern parade for 'Liskeard Lights Up', when the Christmas lights are switched on. 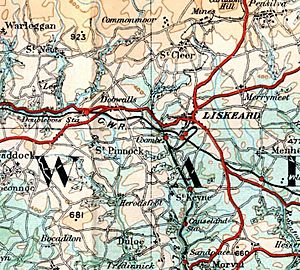 Liskeard and District in the 1920s

Bodmin Moor lies to the northwest of the town. The A38 trunk road used to pass through the town centre but a dual carriageway bypass now carries traffic south of the town leaving the town centre accessible but with low traffic levels. Liskeard is one of the gateway towns for Bodmin Moor.

Liskeard railway station, on the London Paddington to Penzance Cornish Main Line, and the A38 trunk road provide the town with access to Plymouth, the rest of Cornwall and the motorway network. The town is also served by the Looe Valley branch line to Looe. There are bus services of varying frequencies to Plymouth and various parts of Cornwall.

There is a leisure centre at Lux Park on the north side of the town: there is a bowling club on the southern side. The town has a Non-League football club Liskeard Athletic F.C. who play at Lux park. The town also has a rugby and cricket club who are both well-supported. The town has a King George V Playing Field. Live music and various theatrical events frequently take place in the unusual but acoustically good Carnglaze Caverns just to the north.

There are three trails, each has its own blue commemorative plaque (these were unveiled by former town mayor, Sandra Preston).

In 1974 Liskeard was twinned with Quimperlé (Kemperle) in Brittany, France.

The first school in Liskeard was founded in 1550 on Castle Hill. For a time it was maintained by the Earls of St Germans, but it closed around 1834 due to a decline in numbers and financial difficulties. From 1835 a series of private schools existed in the borough, until 1908 when Cornwall Education Committee built the County School at Old Road. From 1945 it was known as Liskeard Grammar School until September 1978 when it became the Lower School site of Liskeard School, following amalgamation with the town's secondary modern school.

Liskeard County Secondary School received its first pupils on Monday 12 September 1960, and was formally opened by the Minister of Education, Sir David Eccles on 7 July the following year. Costing £100,000, it was built to accommodate around 500 pupils on the site of the current school at Luxtowe. Its glass and steel structure made "free use of fresh air and sunlight" according to local newspaper reports, whilst other modern features included a well-equipped gymnasium, automated central heating and synchronised clocks across the school, operated from the secretary's office. A new block was opened by the Right Honourable Margaret Thatcher, Secretary of State for Education and Science in 1974, following the raising of the school leaving age from 15 years to 16, two years earlier. Like many similar secondary schools in Cornwall, from the late 1970s it housed the Upper School (3rd Year / Year 9 upwards), when it merged with the town's grammar school to create a split-site comprehensive school.

Twenty years later, with increased pupil numbers requiring many to be taught in temporary buildings, the need for improvements to Liskeard's secondary and primary schools was being raised in Parliament. By the late 1990s, Liskeard School and Community College had been extended at Luxstowe, and the Old Road site closed and redeveloped for housing. Further multimillion-pound science and technology facilities were added in 2002, and the original 1960s and 1970s buildings were completely modernised by 2011. As Cornwall's only school with an engineering speciality, it now caters for approximately 1300 students aged between 11 and 19, and employs around 200 teaching and non-teaching, full- and part-time staff. It also has a creche, a teenage advice and information service, a centre for children with autism, and facilities at Moorswater where some engineering-based courses are taught.

There are two primary schools in Liskeard: St Martin's Church of England (Voluntary Aided) School in Lake Lane and Hillfort Primary School on Old Road. The latter was opened in September 2006 following the renaming of Liskeard Junior School after its merger with Liskeard Infant School.

Caradon Short Stay School (previously known as a Pupil Referral Unit) is located in West Street, on the site of the former Liskeard Infant School. It provides education for students aged 11–16 from across south east Cornwall who are unable to attend a mainstream school or special school. The nearest independent schools are in Plymouth and Tavistock, Devon.

All content from Kiddle encyclopedia articles (including the article images and facts) can be freely used under Attribution-ShareAlike license, unless stated otherwise. Cite this article:
Liskeard Facts for Kids. Kiddle Encyclopedia.