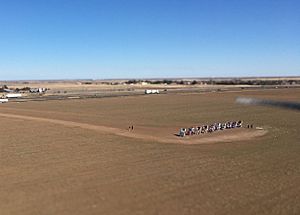 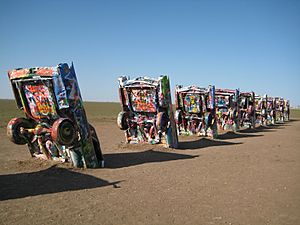 Brightly painted Cadillacs, all in a row 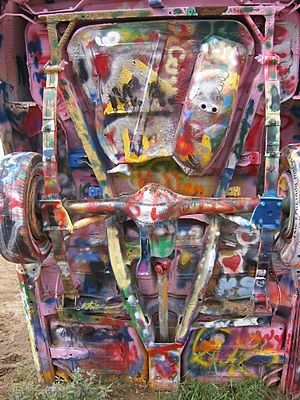 Butt of a Cadillac

Cadillac Ranch is a public art installation and sculpture in Amarillo, Texas, USA. It was created in 1974 by Chip Lord, Hudson Marquez and Doug Michels, who were a part of the art group Ant Farm.

The installation consists of ten Cadillacs (1949-1963) buried nose-first in the ground. Installed in 1974, the cars were either older running, used or junk cars — together spanning the successive generations of the car line — and the defining evolution of their tailfins.

Chip Lord and Doug Michels were architects; Marquez was an art student at Tulane University in New Orleans, Louisiana. According to Chip Lord, "Ant Farm was founded as an alternative architectural practice, kind of an experiment in an attempt to subvert normal corporate ways of doing architecture."

According to Marquez, "Chip and I were living in the mountains north of San Francisco, and there was a book meant for kids left in a bar near where we lived. It was called ‘The Look of Cars,’ and there was something on the rise and fall of the tail fin. I didn't have a lot to do, so I just sorta drew it up. I’ve always loved the Cadillacs."

The group claims to have been given a list of eccentric millionaires in 1972 in San Francisco, identifying Stanley Marsh 3 of Amarillo amongst those who might be able to fund one of their projects and submitted it to him. Marsh's response began "It's going to take me awhile to get used to the idea of the Cadillac Ranch. I'll answer you by April Fool's Day. It's such an irrelevant and silly proposition that I want to give it all my time and attention so I can make a casual judgment of it."

Cadillac Ranch was originally located in a wheat field, but in 1997, the installation was quietly moved by a local contractor to a location two miles (three kilometers) to the west, to a cow pasture along Interstate 40, in order to place it farther from the limits of the growing city. Both sites belonged to the local millionaire Stanley Marsh 3, the patron of the project. Marsh was well known in the city for his longtime patronage of artistic endeavors including the Cadillac Ranch; Floating Mesa; Amarillo Ramp, a work by land artist Robert Smithson; and a series of fake traffic signs throughout the city known collectively as the Dynamite Museum. As of 2013, Stanley Marsh 3 did not own the Cadillac Ranch; ownership appears to have been transferred to a family trust some time before his June 2014 death.

Cadillac Ranch is visible from the highway, and though located on private land, visiting it (by driving along a frontage road and entering the pasture by walking through an unlocked gate) is tacitly encouraged. In addition, writing graffiti on or otherwise spray-painting the vehicles is now encouraged, and the vehicles, which have long since lost their original colors, are wildly decorated. Ant Farm artists have encouraged this kind of public interaction with the cars.

"If it had been sited in a remote place," Chip Lord said, "it would be pristine today." "And no one would have seen it," Doug Michels added. "We wanted it to be an interactive monument, so people could express themselves."

The cars are periodically repainted various colors (once white for the filming of a television commercial, another time pink in honor of Stanley's wife Wendy's birthday, and again all 10 cars were painted flat black to mark the passing of Ant Farm artist Doug Michels, or simply to provide a fresh canvas for future visitors). In 2012 they were painted rainbow colors to commemorate gay pride day. The cars were briefly "restored" to their original colors by the motel chain Hampton Inn in a public relations-sponsored series of Route 66 landmark restoration projects. The new paint jobs and even the plaque commemorating the project lasted less than 24 hours without fresh graffiti. The cars were painted solid black with the words "Black Lives Matter" in June 2020 by activists protesting police brutality and the murder of George Floyd.

On September 8,2019 one of the Cadillacs was damaged by fire.

All content from Kiddle encyclopedia articles (including the article images and facts) can be freely used under Attribution-ShareAlike license, unless stated otherwise. Cite this article:
Cadillac Ranch Facts for Kids. Kiddle Encyclopedia.