Galena is a city in Cherokee County, Kansas, United States. As of the 2010 census, the city population was 3,085.

Although the railroad was built through the territory of Galena in 1871, the town did not start until the discovery of lead there in the spring of 1877. The first post office was established in 1877.

The city was originally platted by the Galena Mining and Smelting Company and was to be known as Cornwall. The city was actually known as Short Creek when first established because of a nearby creek and was known as Bonanza briefly before taking the present name of Galena in 1877, which is named after the lead ore galena found in the area. The city was part of the tri state mining area and had over 30,000 inhabitants. After the mines closed in the 1970s, population decreased.

The Jayhawk Ordnance Works northwest of Galena, built during World War II, was a large ordnance plant producing ammonium nitrate. After the war it was privatized by its operator Kenneth Aldred Spencer and at one point was the world's largest producer of ammonium nitrate fertilizer in the world. It would form the basis for the Spencer Chemical Company's fortune which would eventually be funneled into numerous philanthropies throughout Missouri and Kansas. The Spencer family had been in the area because of their ownership of the Pittsburg and Midway Coal Co. mining operation. The plant is still in operation as the Jayhawk Fine Chemicals Corporation. 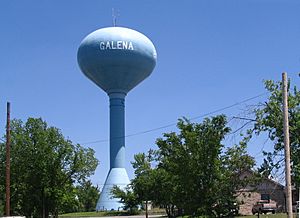 There were 1,198 households, of which 34.1% had children under the age of 18 living with them, 43.2% were married couples living together, 16.4% had a female householder with no husband present, 6.6% had a male householder with no wife present, and 33.9% were non-families. 29.0% of all households were made up of individuals, and 13% had someone living alone who was 65 years of age or older. The average household size was 2.51 and the average family size was 3.04.

The community is served by Galena USD 499 public school district. Galena is home to Galena High School. In 1916 the Kansas Supreme Court heard a case where the school superintendent separated the African American ("colored") children and had them taught together from various grades by an African American teacher. The court rejected the district's decision making and requires students of different backgrounds be taught together.

All content from Kiddle encyclopedia articles (including the article images and facts) can be freely used under Attribution-ShareAlike license, unless stated otherwise. Cite this article:
Galena, Kansas Facts for Kids. Kiddle Encyclopedia.