According to the United States Census Bureau, the city has a total area of 0.9 square miles (2.3 km2), all of it land.

Adrian, Texas bills itself as the midway point between Chicago and Los Angeles on historic Route 66 with signage proudly declaring "← Los Angeles 1139 miles — Chicago 1139 miles →" to travellers on the old highway who arrive from as far afield as Europe. The "US 66 midpoint" branding was adopted in 1995 on the advice of travel author and Route 66 Association founder Tom Snyder. Fran Houser, owner of the Midpoint Café restaurant, antique and souvenir shop from 1990 until 2012, is the basis for Flo of the "Flo's V-8 Café" diner in Cars. The café, built in 1928 and located between a motel and a former filling station, operated 24 hours a day during Route 66's heyday.

Other US 66 attractions in Adrian include a Lions Antique Museum which displays farm and ranch equipment from the 1920s to 1950s, a Windmill which draws water from a well drilled by the Rock Island Railroad and an Antique Ranch which offers antiques and barbecue. The long-closed Bent Door Café and trading post, built by Bob Harris in 1947 on the site of the 1940s Kozy Kottage Kamp, incorporates portions of a former air traffic control tower decommissioned after World War II; the tower windows originally slanted toward the runway, so the door is bent to match. The most recent Bent Door restoration efforts were made in 2009. 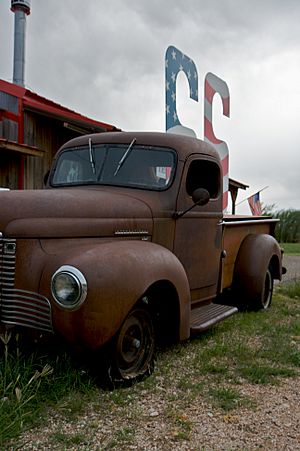 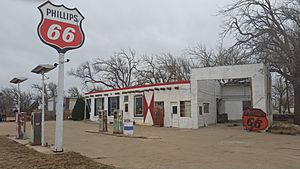 Remnants of more prosperous times along Route 66 in Adrian

The community originated in 1900, when the Rock Island Railroad survey marked the site as a future station and shipping point. Former Texas Ranger Calvin G. Aten was one of the area's first settlers. He built a dugout west of the site for his family. The town was named after another early settler, Adrian Cullen. In 1909, the Chicago, Rock Island and Gulf Railway was completed through Adrian. The Iowa-based American-Canadian Land and Townsite Company attracted prospective farmers and businessmen to the community. J.P. Collier set up a printing press and dug a water well, running water pipe for the town's first infrastructure. By 1910, Adrian had a post office, several stores, and a newspaper – the Adrian Eagle. Approximately 50 people were living in the community in 1915. The slow growth rate was attributed to a lengthy drought and the difficulty of maintaining a sufficient water supply. Adrian became a stopping point for travelers on Route 66 and a shipping point for area wheat growers. A grain elevator was built in 1929 and the community organized a volunteer fire department during the 1940s.

Adrian was incorporated in 1953 and adopted a mayor-council form of government. During the latter half of the twentieth century, the population hovered around 220. By 2000, Adrian's population had declined to 159. It is one of two incorporated places in Oldham County, the other being the city of Vega. 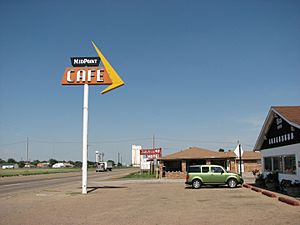 There were 72 households out of which 23.6% had children under the age of 18 living with them, 54.2% were married couples living together, 9.7% had a female householder with no husband present, and 33.3% were non-families. 31.9% of all households were made up of individuals and 12.5% had someone living alone who was 65 years of age or older. The average household size was 2.21 and the average family size was 2.79.

According to the Köppen Climate Classification system, Adrian has a semi-arid climate, abbreviated "BSk" on climate maps.

All content from Kiddle encyclopedia articles (including the article images and facts) can be freely used under Attribution-ShareAlike license, unless stated otherwise. Cite this article:
Adrian, Texas Facts for Kids. Kiddle Encyclopedia.