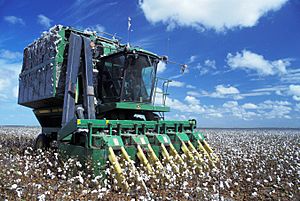 The cotton picker is a machine that automates cotton harvesting in a way that reduces harvest time and maximizes efficiency.

Cotton picking was originally done by hand. In many societies, like America, slave and serf labor was utilized to pick the cotton, increasing the plantation owner's profit margins (See Trans-Atlantic Slave Trade). The first practical cotton picker was invented over a period of years beginning in the late 1920s by John Daniel Rust (1892–1954) with the later help of his brother Mack Rust. Other inventors had tried designs with a barbed spindle to twist cotton fibers onto the spindle and then pull the cotton from the boll, but these early designs were impractical because the spindle became clogged with cotton. Rust determined that a smooth, moist spindle could be used to strip the fibers from the boll without trapping them in the machinery. In 1933 John Rust received his first patent, and eventually, he and his brother owned forty-seven patents on cotton picking machinery. However, during the Great Depression it was difficult to obtain financing to develop their inventions.

In 1935 the Rust brothers founded the Rust Cotton Picker Company in Memphis, Tennessee, and on August 31, 1936 demonstrated the Rust picker at the Delta Experiment Station in Stoneville, Mississippi. Although the first Rust picker was not without serious deficiencies, it did pick cotton and the demonstration attracted considerable national press coverage. Nevertheless, the Rust's company did not have the capability of manufacturing cotton pickers in significant quantities. With the success of the Rust picker, other companies redoubled their efforts to produce practical pickers not based on the Rust patents. Then, widespread adoption was delayed by the manufacturing demands of World War II. The International Harvester produced a commercially-successful commercial cotton picker in 1944. After World War II, the Allis-Chalmers Manufacturing Company manufactured cotton pickers using an improved Rust design. In the following years mechanical pickers were gradually improved and were increasingly adopted by farmers. 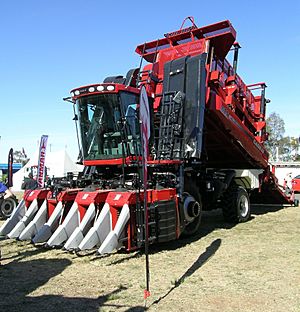 The first pickers were only capable of harvesting one row of cotton at a time, but were still able to replace up to forty hand laborers. The current cotton picker is a self-propelled machine that removes cotton lint and seed (seed-cotton) from the plant at up to six rows at a time.

There are two types of pickers in use today. One is the "stripper" picker, primarily found in use in Texas. They are also found in Arkansas. It removes not only the lint from the plant, but a fair deal of the plant matter as well (such as unopened bolls). Later, the plant matter is separated from the lint through a process dropping heavier matter before the lint makes it to the basket at the rear of the picker. The other type of picker is the "spindle" picker. It uses rows of barbed spindles that rotate at high speed and remove the seed-cotton from the plant. The seed-cotton is then removed from the spindles by a counter-rotating doffer and is then blown up into the basket. Once the basket is full the picker dumps the seed-cotton into a "module builder". The module builder creates a compact "brick" of seed-cotton, weighing in at approximately 21,000 lb (16 un-ginned bales), which can be stored in the field or in the "gin yard" until it is ginned. Each ginned bale weighs roughly 480 lb (218.2 kg).

In c.2008 the Case IH Module Express 625 was designed in collaboration with ginners and growers to provide a cotton picker with the ability to build modules while harvesting the crop. An industry-exclusive on-board round module builder was offered by John Deere in 2007.

All content from Kiddle encyclopedia articles (including the article images and facts) can be freely used under Attribution-ShareAlike license, unless stated otherwise. Cite this article:
Cotton picker Facts for Kids. Kiddle Encyclopedia.