The Illinois State Fair is an annual festival, centering on the theme of agriculture, hosted by the U.S. state of Illinois in the state capital, Springfield. The state fair has been celebrated almost every year since 1853. Currently, the fair is held annually at the Illinois State Fairgrounds over an 11-day period in mid-August of each year.

In 2019, the Illinois State Fair was held from August 13–23 and set new revenue records along with 509,000 fairgoers in attendance.

The first Illinois State Fair was celebrated in 1853 in Springfield. In that first year, the admission fee was 25 cents. The fair moved to Chicago in 1855. The 1850s were a golden age of agricultural journalism, with a wide variety of editors offering many suggestions, well-founded or not, to increase farm productivity. The first State Fairs, in Illinois and other states, were created and organized by farmers in order to compare notes with their colleagues and distinguish between good and bad advice. 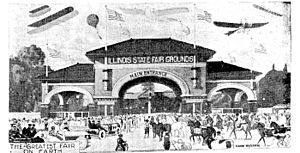 During the years after the Civil War, the rules of agricultural judging became standardized, and more and more farmers began to show their farm products. Increasing knowledge of genetics inspired the breeding and showing of purebred farm animals at both county fairs and the Illinois State Fair.

In the first half of the 20th century, the internal combustion engine revolutionized life on the American farm, with manufacturers of agricultural machinery eagerly taking advantage of occasions like the Illinois State Fair to demonstrate their new products.

The Illinois State Fair was held almost every summer during this more than 150-year-long period. On a few occasions it was suspended. In 1893, for example, the organizers of the World's Columbian Exposition in Chicago prepared to offer a larger lineup of agricultural products and machinery, so the Illinois State Fair canceled itself for one year.

The Illinois State Fair, like many state fairs, moved during the first 40 years of its life, 1853–1892, from place to place. It was celebrated as far north as Freeport and as far south as Du Quoin. In 1894, the State of Illinois began to use a 156-acre (0.63 km2) parcel of land on the northern boundary of Springfield, which became the heart of the permanent Illinois State Fairgrounds. A grandstand and racetrack were built, and the first auto races were held at the Illinois State Fairgrounds Racetrack in 1910. The fairground site was expanded to its current 366-acre (1.48 km2) dimensions in 1924. 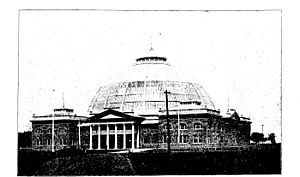 During 1895, the Dome Building was constructed on the grounds. The building's huge glass dome, the world's second largest unsupported dome at 222 feet in diameter, had been part of the 1893 Chicago World's Fair. It was purchased for $69,000, taken down in Chicago and reassembled at the state fairgrounds. The building could accommodate 10,000 people and housed horticultural displays and National Guard offices. In 1917, about 1,500 soldiers waiting to go to war were temporarily housed in the Dome Building. On August 17, the building caught fire. Within 30 minutes after the fire was discovered, the huge glass dome came crashing down. At the time of the fire the building was valued at $300,000, but insured for only $20,000, and as a result, the remains of the building were later demolished. Apparently the soldiers were not to blame for the fire nor were any injured by it. Besides that year, there was also no fair in 1918.

There was no state fair during the period 1942-1945 because the fairgrounds were used as a U.S. Army Air Force supply depot. According to one historian, in the fall of 1943 more than 1,000 Chinese military personnel were trained on the grounds. 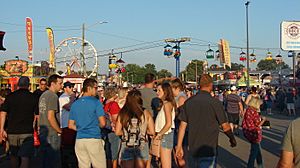 The Illinois State Fair in 2019

Starting with the end of World War II, the growth of productivity in agriculture began to reduce the number of jobs in American farming, both as a percentage of total population and in absolute numbers. State fairs began to transition themselves from agricultural trade shows to entertainment operations.

In Illinois, the State Fair Grandstand, originally built as a place to watch harness racing (and still used for that purpose as of 2019) became a venue for concerts and recitals. The "state fair circuit" became a recognized part of the overall live-music industry for many performers, especially but not exclusively in country music. Noted concerts held at The Grandstand include The Who, performing as an opening act for The Association in 1968.

Agricultural show operations, competitions, and judging continued in Springfield, but many State Fairgoers in 2019 were attending the fair to watch parades and spectacles, enjoy the festival rides, listen to music, or drink beer in one of numerous "beer tents."

The Illinois State Fairgrounds are also used as a venue for other competitive and entertainment operations throughout the year, such as motorcycle and car racing, horse shows, and rodeos.

The 2020 state fair was cancelled as a safety measure during the COVID-19 pandemic in Illinois, the first cancellation since World War II. The Department of Agriculture held a much smaller-scale Junior Livestock Expo on the fairgrounds in September to replace the animal show portions of the fair.

All content from Kiddle encyclopedia articles (including the article images and facts) can be freely used under Attribution-ShareAlike license, unless stated otherwise. Cite this article:
Illinois State Fair Facts for Kids. Kiddle Encyclopedia.