Burlington station is a train station in Burlington, Iowa, United States, served by Amtrak, the national railroad passenger system. The station, located at 300 South Main Street, is open 24 hours a day, but there are no Amtrak personnel or ticket machines at the station at any time: tickets must be purchased in advance or on the train from a conductor. The station acts as transfer hub for Burlington Urban Service (B.U.S.), a local municipal bus system; riders can transfer to every bus route in the B.U.S. system.

Designed by the well-known Chicago-based architectural firm of Holabird and Root for the Chicago, Burlington and Quincy Railroad (CB&Q), the station was built in 1944 after a fire burned down the previous structure in January 1943. The depot exemplifies the streamlined mid-century modern aesthetic that came into vogue in the 1930s. The two-story station, constructed of reinforced concrete, is faced in buff-colored Wisconsin Lannon fieldstone laid in a random ashlar pattern. Areas for train and bus passengers were located on the lower level while the upper story contained offices for the general superintendent, freight agent, division engineer and telephone and telegraph operators. There was also space for trainmen to sleep and relax between shifts.

The two-story waiting room features walls clad in a buff Montana travertine; durable terrazzo floors; and black marble accents and trim. On one wall of the waiting room, the CB&Q inscribed many of the major achievements that it had accomplished in its namesake city, such as the testing of inventor George Westinghouse's air brakes in 1887. 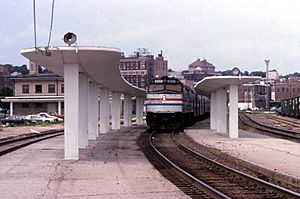 The California Zephyr at Burlington in 1995.

Following a flood in the summer of 1993, the city purchased the building from the Burlington Northern Railroad in 1994 and undertook a series of renovations including roof repairs and the installation of new windows. A “Friends of the Depot” group also formed to help the city maintain the structure and encourage ideas for its adaptive reuse. Using more than $1,000 donated by Amtrak, the Friends organized work days in 2011 and 2012 during which volunteers painted the depot's exterior trim and caulked windows.

All content from Kiddle encyclopedia articles (including the article images and facts) can be freely used under Attribution-ShareAlike license, unless stated otherwise. Cite this article:
Burlington station (Iowa) Facts for Kids. Kiddle Encyclopedia.