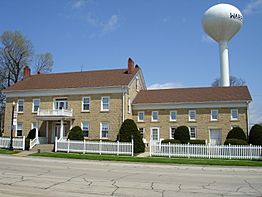 The Old Stone Hotel in Warren is on U.S. National Register of Historic Places

Warren was named after Warren Burnett, the first white child born at the site.

Captain Alexander Burnett was the first known American settler in present-day Warren; he built a log cabin at the corner of what is now the corner of Main and Water Streets in 1843. In 1851 a stagecoach stop was erected on the Stagecoach Trail, the building still stands and is now serving as the Warren Community Building. The village was platted in 1853 along the proposed route for the Illinois Central Railroad tracks and later growth in Warren was heavily influenced by the presence of the railroad. The main commercial district is concentrated along both sides of the railroad tracks on Main and Railroad Streets. The village was officially incorporated in February 1857.

The Township library was built in 1911. From 1916 to 1920, Warren had the first female Mayor in Illinois,Angela Rose Canfield.

There were 622 households, out of which 28.6% had children under the age of 18 living with them, 54.5% were married couples living together, 8.7% had a female householder with no husband present, and 34.4% were non-families. 30.1% of all households were made up of individuals, and 19.1% had someone living alone who was 65 years of age or older. The average household size was 2.41 and the average family size was 3.00.

The Village of Warren holds "The Pumpkin Festival" every year on the last weekend of September. The festival includes a large parade, arts and crafts, and Fall produce. Warren is also the location of the Jo Daviess County Fair. This is usually held around the first week of August. The event is the oldest county fair in the state of Illinois. It is also a location of the Stagecoach Trail Festival, held along the Stagecoach Trail.

All content from Kiddle encyclopedia articles (including the article images and facts) can be freely used under Attribution-ShareAlike license, unless stated otherwise. Cite this article:
Warren, Illinois Facts for Kids. Kiddle Encyclopedia.