Stephenson County is a county located in the U.S. state of Illinois. According to the 2010 United States Census, it had a population of 47,711. Its county seat is Freeport. 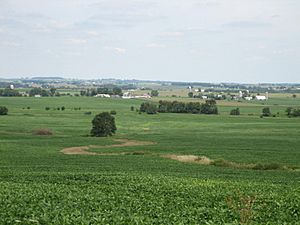 A northerly look across Stephenson County's western edge from an overlook near Kent, Illinois

There are five public high schools and one private high Schools in the county: (approximate enrollment included)

All content from Kiddle encyclopedia articles (including the article images and facts) can be freely used under Attribution-ShareAlike license, unless stated otherwise. Cite this article:
Stephenson County, Illinois Facts for Kids. Kiddle Encyclopedia.