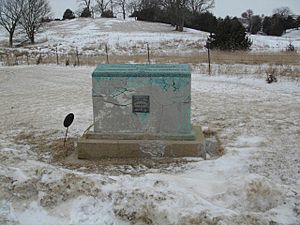 In 1934, this marker was placed to commemorate Waddams' settlement.

Toward the end of the summer of 1832, William Waddams, and his sons Hiram and Nelson, arrived in Stephenson County and founded Waddams Grove following the end of the Black Hawk War. This created the first permanent settlement in the county, and paved the way for future settlements. Waddams moved his family from Jo Daviess County in the spring of 1833 to the new settlement, and built his home there. Waddams would stay in the community until his death after having lived in other settlements including in Indiana, Peoria, Illinois, and Galena, Illinois. Waddams Grove is considered the launching spot for all other settlements in Stephenson County; most settlers stopped at Waddams Grove before moving on to their land claims.

All content from Kiddle encyclopedia articles (including the article images and facts) can be freely used under Attribution-ShareAlike license, unless stated otherwise. Cite this article:
Waddams Grove, Illinois Facts for Kids. Kiddle Encyclopedia.