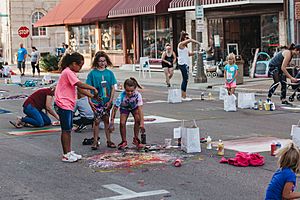 Paint the Port is an annual festival in Downtown Freeport held in September and hosted by the Freeport Art Museum. 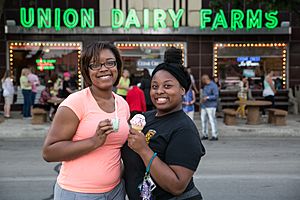 Enjoying a night at Union Dairy in Downtown Freeport 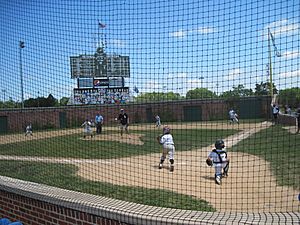 Freeport is home to the mini-Wrigley replica, Little Cubs Field. The field is open or can be reserved for private gatherings such as tournaments, family reunions, or other events.

Freeport is the county seat and largest city of Stephenson County, Illinois, United States. The population was 25,638 at the 2010 census, and the mayor of Freeport is Jodi Miller, elected in 2017. Freeport is known for hosting the second Lincoln-Douglas debate of 1858, and as "Pretzel City, USA", due to a popular local German bakery known for its pretzels in the 1850s. Freeport High School's mascot is the Pretzel to honor its heritage.

The community was originally called Winneshiek. When it was incorporated, the new municipality took its name from the generosity of Tutty Baker, who was credited with running a "free port" on the Pecatonica River. The name "Winneshiek" was later adopted, and is preserved to this day, by the Freeport Community Theatre Group.

In 1837, Stephenson County was formed and Freeport became its seat of government in 1838. Linked by a stagecoach with Chicago, the community grew rapidly. In 1840, a frame courthouse was erected and the first school was founded. Within two years, Freeport had two newspapers and in 1853, the two were joined by a third which published in German. By then, the community had a population of 2,000.

On August 27, 1858, the second debate between Abraham Lincoln and Stephen A. Douglas took place in Freeport and gave the nation direction in the following years. Although Stephen Douglas won the election and retained his U.S. Senate seat, his reply to a question on slavery alienated the South, which called it the "Freeport Heresy", and split the Democratic Party. This enabled Abraham Lincoln to win the Presidency in 1860.

A monument to the debate was dedicated in 1903 by President Theodore Roosevelt and stands at this site. A life size statue recreating the event was dedicated in 1992. Another renowned statue, Lincoln the Debator by Leonard Crunelle, is a focal point in the city's Taylor Park. In many years there is also a reenactment of the debate, which has been shown on C-SPAN.

Freeport is known as the "Pretzel City", and its public high school's team is named the Pretzels. The nickname is a reminder of Freeport's ethnic heritage; in the late 1850s, many Germans, both from Pennsylvania and from their European homeland, resettled in Stephenson County bringing with them their love of pretzel snacks. In 1869, a German immigrant named John Billerbeck established the Billerbeck Bakery, which distributed so many pretzels to residents that the local newspaper later dubbed Freeport the "Pretzel City". The city later capitalized on this nickname in 2003 by starting Freeport's first Pretzel Festival.

Freeport is home to the oldest Carnegie Library in Illinois and one of the first Carnegie Libraries designed by the famous Chicago architectural firm of Patton and Miller. It is being renovated into Freeport's City Hall.

Before February 1893, a large square of land was purchased from the former Keller-Wittbecker farm in East Freeport. Some of this land had recently been subdivided and platted as the "Arcade Addition". The Arcade Manufacturing Company had been in operation since 1885 when the previous Novelty Iron Works had gone out of business at the corner of Chicago and Jackson streets. That earlier company began as early as 1868. After the 1892 fire, the Arcade Manufacturing Company built an entirely new factory in the Arcade Addition of East Freeport, where they produced coffee mills and other metal products. 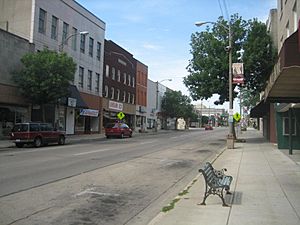 Freeport is located approximately 20 miles (32 km) south of the Wisconsin state line, and at the center of a large agricultural area, located about 25 miles (40 km) west of Rockford.

U.S. Route 20 is a four-lane divided highway that skirts the community's northern edge. At Rockford, it links with Interstates 90 and 39, giving Freeport residents access to the entire Interstate system. I-90 is the major route between Boston and Seattle. I-39 extends from Rockford to Bloomington, where it links with I-74 and I-55. From Freeport, U.S. 20 continues west to Galena, and the metropolitan area of Dubuque, Iowa. 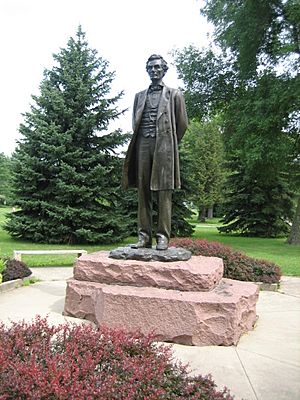 Lincoln the Debater by sculptor Leonard Crunelle, in Taylor Park 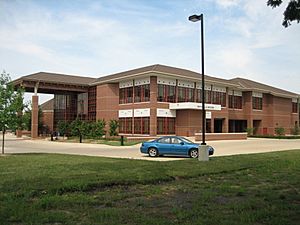 The Freeport Public Library on the cusp of downtown Freeport

Tourist sites in the area include the Don Opel Arboretum, a botanical garden with over 3,000 different species of ground coverings, trees and shrubs. The Stephenson County Historical Society Museum includes Oscar Taylor House, a one-room schoolhouse, the Industrial/Arcade Toy Museum, an Irish homestead log cabin, and an arboretum. The Freeport Art Museum is located on N. Harlem Avenue.

All content from Kiddle encyclopedia articles (including the article images and facts) can be freely used under Attribution-ShareAlike license, unless stated otherwise. Cite this article:
Freeport, Illinois Facts for Kids. Kiddle Encyclopedia.