Gannett Peak is the highest mountain peak in the U.S. state of Wyoming at 13,810 feet (4,210 m). It lies in the Wind River Range within the Bridger Wilderness of the Bridger-Teton National Forest. Straddling the Continental Divide along the boundary between Fremont and Sublette counties, it has the second greatest topographic prominence in the state (7076') after Cloud Peak (7077'), and is the highest ground for 290.36 miles (467.29 kilometers) in any direction.

Geographically, Gannett Peak is the apex of the entire Central Rockies, the largely continuous chain of mountains occupying the states of Wyoming, Idaho and Montana. Named in 1906 for American geographer Henry Gannett, the peak is also the high point of the Wind River Range. The mountain slopes are located in both Bridger-Teton National Forest and Shoshone National Forest.

Gannett is the highest peak within what is better known as the Greater Yellowstone Ecosystem and is the highest peak in the Rocky Mountains outside of Colorado. The 896-acre (3.63 km2) Gannett Glacier, which is likely the largest single glacier in the American portion of the Rocky Mountains, extends across the northern slopes of the mountain. Minor Glacier is situated in the western cirque of the peak while Dinwoody and Gooseneck Glaciers can be found on the southeast side of the mountain. 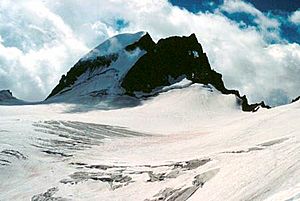 Gannett Glacier on the north side of the peak

Gannett Peak is in the heart of a remote and rugged wilderness. Because of this, its elevation, and extreme weather, it is often considered by mountaineers to be one of the most difficult U.S. state high points to reach, after Denali and possibly Granite Peak.

Importantly, there have been notable incidents, including accidental deaths, due to falls from steep cliffs (a misstep could be fatal in this class 4/5 terrain) and due to falling rocks, over the years, including 1993, 2007 (involving an experienced NOLS leader), 2011, 2015, 2017 and 2018. Other incidents in the Wind River Range include a seriously injured backpacker being airlifted near SquareTop Mountain in 2005, and a fatal hiker incident (from an apparent accidental fall) in 2006 that involved state search and rescue. The U.S. Forest Service does not offer updated aggregated records on the official number of fatalities in the Wind River Range.

All content from Kiddle encyclopedia articles (including the article images and facts) can be freely used under Attribution-ShareAlike license, unless stated otherwise. Cite this article:
Gannett Peak Facts for Kids. Kiddle Encyclopedia.