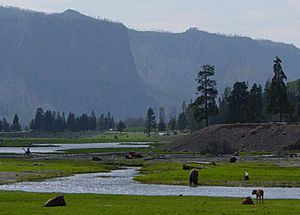 The Greater Yellowstone Ecosystem is one of the last remaining large, nearly intact ecosystems in the northern temperate zone of the Earth. It is partly in Yellowstone National Park. Its management has been controversial: the area is a flagship site for conservation groups that promote ecosystem management. The Greater Yellow Ecosystem (GYE) is a kind of natural laboratory in landscape ecology and geology. It is a world-renowned recreational site, and home to the animals of Yellowstone.

In 1985 the United States House of Representatives Subcommittees on Public Lands and National Parks and Recreation held a joint subcommittee hearing on Greater Yellowstone. The result was a 1986 report by the Congressional Research Service which said that different agencies were not working well together, and the area's essential values were at risk.

There are other areas within the Greater Yellowstone area which are managed by federal authorities. They include the Gallatin, Custer, Caribou-Targhee, Bridger-Teton and Shoshone National Forests, the John D. Rockefeller, Jr. Memorial Parkway, the National Elk Refuge and Grand Teton National Park. The GYE also includes some private lands around those managed by the U.S. Government.

Outside of Yellowstone National Park, ten wilderness areas have been established in the National Forests since 1966 to get more habitat protection than usual.

All content from Kiddle encyclopedia articles (including the article images and facts) can be freely used under Attribution-ShareAlike license, unless stated otherwise. Cite this article:
Greater Yellowstone Ecosystem Facts for Kids. Kiddle Encyclopedia.