Brasstown Bald is the highest point in the U.S. state of Georgia. It is located in the northeastern part of the state in the Blue Ridge Mountains on the border between Towns and Union counties south of the city of Hiawassee. The mountain is known to the native Cherokee people as Enotah. 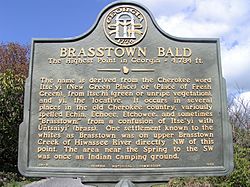 According to the two Georgia historical markers, the area surrounding Brasstown Bald was settled by the Cherokee people. English-speaking settlers derived the word "Brasstown" from a translation error of the Cherokee word for its village place. Settlers confused the word Itse'yĭ" (meaning "New Green Place" or "Place of Fresh Green"), which the Cherokee used for their village, with Ûňtsaiyĭ ("brass"), and referred to the settlement as Brasstown. Itse'yĭ is a Cherokee locative name given to several distinct areas in the Cherokee region, including an area nearby over the current state line of North Carolina.

Cherokee legend tells that a great flood swept over the land. All the people died except a few Cherokee families who sought refuge in a giant canoe. The canoe ran aground at the summit of a forested mountain (now known as Enotah). As there was no wild game for the people to hunt and no place for them to plant crops, the Great Spirit killed all the trees on the top of the mountain so that the surviving people could plant crops. They continued planting and lived from their crops until the water subsided.

The term "Bald" is common terminology in the southern Appalachians describing mountaintops that have 360-degree unobstructed views.

Former Georgia Supreme Court Judge T.S. Candler is memorialized with a stone monument at Brasstown Bald; it was erected in 1971 three months before he died in recognition of his efforts to support visitors to the mountain.

T.S. Candler was born to William Ezekiel Candler and Mary Haralson on December 15, 1890, in nearby Blairsville, Georgia. Candler was a graduate from Young Harris College in 1913 and later attended the University of Georgia Law School, where he received his degree in 1915. After graduating, Candler returned to Blairsville. He began to practice law and became a prominent public figure in the community. He supported creating a visitors center at Brasstown Bald for the public.

From the northeast, starting at the intersection of Owl Creek Road and the concurrent Georgia 17 and Georgia 75 near Mountain Scene, the climb is 13.5 kilometers (8.4 mi) long, gaining 828 meters (2,717 ft).

An additional route to the summit is the Wagon Train Trail, starting at Young Harris College. The trail is traditionally hiked by graduating students and their families on the evening before graduation; a vespers service is held at the summit.

In the 2005 through 2008 editions of the Tour de Georgia, a long-distance bicycle race, Brasstown Bald was the site of an hors categorie "King of the Mountains stage" finish.

All content from Kiddle encyclopedia articles (including the article images and facts) can be freely used under Attribution-ShareAlike license, unless stated otherwise. Cite this article:
Brasstown Bald Facts for Kids. Kiddle Encyclopedia.