Jarvis Island formerly known as Bunker Island, or Bunker's Shoal is an uninhabited coral island located in the South Pacific Ocean, about halfway between Hawaii and the Cook Islands. It is part of the National Wildlife Refuge system. Unlike most coral atolls, the lagoon on Jarvis is wholly dry.

Jarvis Island was officially made part of the United States in 1858. People used to mine guano there, but they then abandoned it. The United States treats it as a nature reserve. 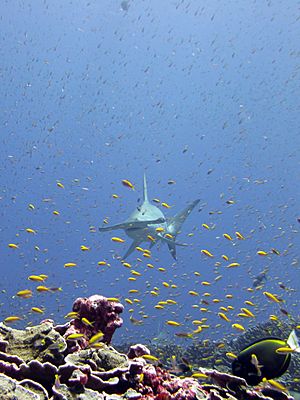 A Hammerhead Shark cruises the bottom at Jarvis Island

Located 25 miles south of the equator, Jarvis Island, is an uninhabited coral island located in the South Pacific Ocean. Jarvis has no known natural freshwater sources, and very little rain. This creates a very bleak, flat landscape with plants no larger than shrubs. Jarvis Island has no ports or docks, other than a reef the guano miners blew up in order for the cargo boats to be able to drop anchor.

Its grass, vines and low-growing bushes are primarily a nesting, roosting, and foraging habitat for wildlife. The island has a tropical desert climate, with high temperatures in the day, constant wind, and a very hot sun. There is no evidence that the island has ever supported a native human population.

Settlers were moved to Jarvis Island in 1935 to maintain a weather station and plan a landing field. A settlement called Millersville was established on the west coast of the island because of it was the highest elevation. The Japanese shelled the island in 1942 and the men living on Jarvis were evacuated soon afterward.

The island's first known sighting by Europeans was on August 21, 1821 by the British ship Eliza Francis (or Eliza Frances) owned by Edward, Thomas and William Jarvis and commanded by Captain Brown.

The US Exploring Expedition surveyed the island in 1841. In March 1857 the island was claimed for the United States under the Guano Islands Act and formally annexed on February 27, 1858. 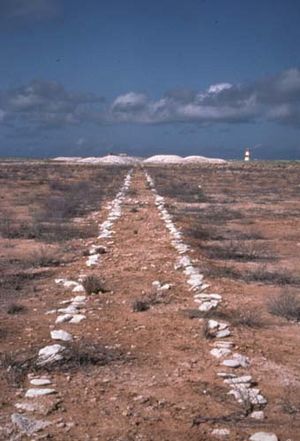 Remains of a guano tramway on Jarvis Island, looking west with 125-year-old heaps of mined but never-shipped guano in the background

The American Guano Company, which was incorporated in 1857, established claims in respect of Baker Island and Jarvis Island which was recognized under the U.S. Guano Islands Act of 1856. Beginning in 1858, several support structures were built on Jarvis Island. Tram tracks were laid down for bringing mined guano to the western shore.

For the following twenty-one years, Jarvis was commercially mined for guano, sent to the United States as fertilizer, but the island was abruptly abandoned in 1879, leaving behind about a dozen buildings and 8,000 tonnes of mined guano.

Guano is the excrement (waste product) of bats and birds. It is exceptionally high in nitrogen, phosphate, and potassium, three nutrients essential for plant growth. Therefore it is often used as fertilizer, to make plants grow more quickly. 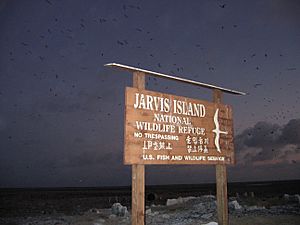 On June 27, 1974, Jarvis Island National Wildlife Refuge was created which was expanded in 2009 to add submerged lands within 12 nautical miles (22 km) of the island. The refuge now includes 1,273 acres (5.15 km2) of land and 428,580 acres (1,734.4 km2) of water. Along with six other islands, the island was administered by the U.S. Fish and Wildlife Service as part of the Pacific Remote Islands National Wildlife Refuge Complex. In January 2009, that entity was upgraded to the Pacific Remote Islands Marine National Monument by President George W. Bush.

A feral cat population, descendants of cats likely brought by colonists in the 1930s, wrought disruption to the island's wildlife and vegetation. These cats were removed through efforts which began in the mid-1960s and lasted until 1990 when they were completely eradicated. Nineteenth-century tram track remains can be seen in the dried lagoon bed at the island's center and the late 1930s-era lighthouse-shaped day beacon still stands on the western shore at the site of Millersville.

Public entry to Jarvis Island requires a special-use permit and is generally restricted to scientists and educators. The island is visited periodically by the U.S. Fish and Wildlife Service and the United States Coast Guard.

All content from Kiddle encyclopedia articles (including the article images and facts) can be freely used under Attribution-ShareAlike license, unless stated otherwise. Cite this article:
Jarvis Island Facts for Kids. Kiddle Encyclopedia.