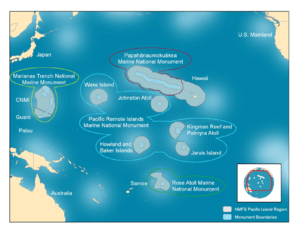 The previous (2011) boundaries of the Pacific Remote Islands Marine National Monument are outlined in light blue. 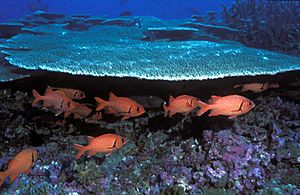 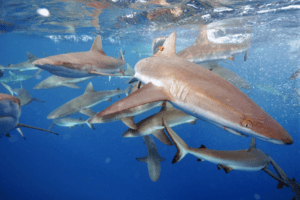 The Pacific Remote Islands Marine National Monument is a group of unorganized, mostly unincorporated United States Pacific Island territories managed by the Fish and Wildlife Service of the United States Department of the Interior and the National Oceanic and Atmospheric Administration (NOAA) of the United States Department of Commerce. These remote refuges are "the most widespread collection of marine- and terrestrial-life protected areas on the planet under a single country's jurisdiction". They protect many endemic species including corals, fish, shellfish, marine mammals, seabirds, water birds, land birds, insects, and vegetation not found elsewhere.

On June 17, 2014, U.S. President Barack Obama proposed using his executive powers to expand the marine protected area to 782,000 square miles (2,030,000 km2). Sport fishing is exempt and public comments were solicited. He then signed a proclamation on September 25, 2014, expanding the monument to six times its original size, resulting in 490,343 square miles (1,269,982 square kilometers) of protected area around these tropical islands and atolls in the south-central Pacific Ocean. Expanding the monument protected the deep coral reefs, seamounts, and marine ecosystems unique to this part of the world, which are also among the most vulnerable areas to the impacts of climate change and ocean acidification. Specifically, it expanded the boundaries to the 200 nmi EEZ for Wake Island, Johnston Atoll, and Jarvis Island, while leaving the 50 nmi boundaries for Kingman Reef and Palmyra Atoll and Howland and Baker Islands.

In September 2017, Trump Administration U.S. Interior Secretary Ryan Zinke recommended that the boundaries of the monument be reduced by an unspecified amount. 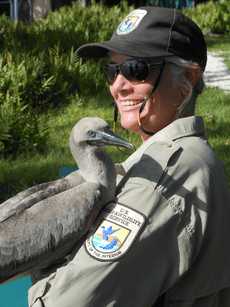 Because the islands are scattered throughout the ocean, the climate is different on each island. Baker, Howland, and Jarvis Islands have an equatorial climate, with scant rainfall, constant wind, and burning sun. Johnston Atoll and Kingman Reef have a tropical climate, but are generally dry, with consistent northeast trade winds with little seasonal temperature variation. Palmyra Atoll has a hot, equatorial climate. Because the atoll is located within the low pressure area of the Intertropical Convergence Zone where the northeast and southeast trade winds meet, it is extremely wet with between 4,000–5,000 mm (160–200 in) of rainfall each year.

Although the islands have no permanent residents, the seven islands that make up the Pacific Remote Islands are stepping stones that connect Hawaii to Micronesia, and other Polynesian sea voyaging cultures. The voyage from Hawaii to neighboring Marshall Islands once included a stop at Johnston Atoll. Wake Atoll is geographically, culturally, and historically linked to the people who live in the Republic of the Marshall Islands. Kingman, Palmyra, Jarvis, Howland, and Baker are connected to the Republic of Kiribati. Voyaging and culture link all of these islands.

Wake has a current transient population of ca. 125 military personnel and contractors. Johnston Atoll had a peak population of 1,100 military and civilian contractor personnel in 2000, but it was evacuated by 2007. Since 2010, volunteer biologists live and work on the island in groups of 5. Four to twenty Nature Conservancy and U.S. Fish and Wildlife staff live at Palmyra Atoll at any one time. The four other islands are usually uninhabited.

Public entry to the islands is by special-use permit from U.S. Fish and Wildlife Service, and is generally restricted to scientists and educators. Only Wake Island, Palmyra Atoll and Johnston Atoll have serviceable runways; Jarvis, Baker and Howland Islands had airstrips in earlier times but they have long been abandoned and are no longer operational.

All content from Kiddle encyclopedia articles (including the article images and facts) can be freely used under Attribution-ShareAlike license, unless stated otherwise. Cite this article:
Pacific Remote Islands Marine National Monument Facts for Kids. Kiddle Encyclopedia.