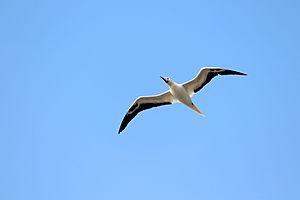 Red footed booby in flight over Half Moon Caye, Belize 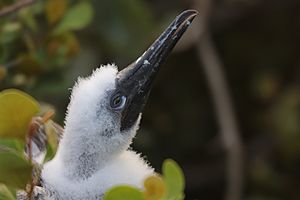 Juvenile red-footed booby poking his head out of his nest on Half Moon Caye, Belize

The red-footed booby (Sula sula) is a large seabird of the booby family, Sulidae. Adults always have red feet, but the colour of the plumage varies. They are powerful and agile fliers, but they are clumsy in takeoffs and landings. They are found widely in the tropics, and breed colonially in coastal regions, especially islands. The species faces few natural or man-made threats, although its population is declining; it is considered to be a least-concern species by the International Union for Conservation of Nature (IUCN).

The first formal description of the red-footed booby was by the Swedish naturalist Carl Linnaeus in 1766 in the twelfth edition of his Systema Naturae. He introduced the binomial name Pelecanus sula. The type locality is Barbados in the West Indies. The present genus Sula was introduced by the French scientist Mathurin Jacques Brisson in 1760. The word Sula is Norwegian for a gannet.

The red-footed booby is the smallest member of the booby and gannet family at about 70 cm (28 in) in length and with a wingspan of up to 152 cm (60 in). The average weight of 490 adults from Christmas Island was 837 g (1.845 lb). It has red legs, and its bill and throat pouch are coloured pink and blue. This species has several morphs. In the white morph the plumage is mostly white (the head often tinged yellowish) and the flight feathers are black. The black-tailed white morph is similar, but with a black tail, and can easily be confused with the Nazca and masked boobies. The brown morph is overall brown. The white-tailed brown morph is similar, but has a white belly, rump, and tail. The white-headed and white-tailed brown morph has a mostly white body, tail and head, and brown wings and back. The morphs commonly breed together, but in most regions one or two morphs predominates; for example, at the Galápagos Islands, most belong to the brown morph, though the white morph also occurs.

The sexes are similar, and juveniles are brownish with darker wings, and pale pinkish legs, while chicks are covered in dense white down.

The species has been recorded three times from Sri Lanka.

In September 2016, a male red-footed booby was found washed up on a beach in East Sussex, UK, 5,000 miles from its nearest usual habitat. It was the first of its species ever recorded in the UK. The bird, later named Norman, was said by some to be exhausted and malnourished, though it flew onto the beach freely and was of normal weight when checked. He was brought back to health before being transported by plane to an environmental center in the Cayman Islands in December 2016, where he subsequently died before ever being released into the wild.

In January 2017, a red-footed booby was sighted on the New Zealand mainland for the first time.

A red-footed booby was observed to be preyed upon by a large coconut crab on the Chagos Archipelago in 2016. 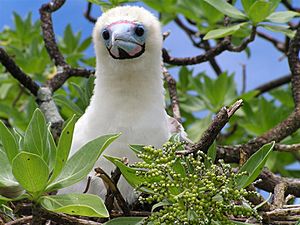 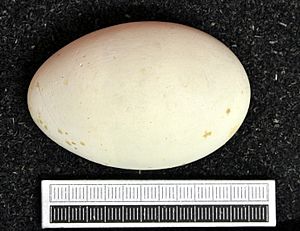 This species breeds on islands in most tropical oceans. When not breeding it spends most of the time at sea, and is therefore rarely seen away from breeding colonies. It nests in large colonies, laying one chalky blue egg in a stick nest, which is incubated by both adults for 44–46 days. The nest is usually placed in a tree or bush, but rarely it may nest on the ground. It may be three months before the young first fly, and five months before they make extensive flights.

Red-footed booby pairs may remain together over several seasons. They perform elaborate greeting rituals, including harsh squawks and the male's display of his blue throat, also including short dances.

Red-footed boobies dive into the ocean at high speeds to catch prey. They mainly eat small fish or squid which gather in groups near the surface.

The International Union for the Conservation of Nature (IUCN) lists the red-footed booby as a species of least concern, though the population worldwide is decreasing. The warm phase (El Niño) of the El Niño–Southern Oscillation in 1982 and 1983 negatively impacted on breeding on Christmas Island as higher water temperatures reduced food supply. Where usually 6000 pairs nested, 30 pairs and the around 60 pairs attempted breeding in 1982 and 1983 respectively.

All content from Kiddle encyclopedia articles (including the article images and facts) can be freely used under Attribution-ShareAlike license, unless stated otherwise. Cite this article:
Red-footed booby Facts for Kids. Kiddle Encyclopedia.