The hard rock of the area resisted the glaciers that covered and flattened much of Ohio during the Ice Ages. The unglaciated land south of the hill became a channel for glacial runoff and formed the Mad River. The river's limestone gorges are due to its recent formation.

To European settlers, Campbell Hill was first known as Hogue's Hill or Hoge's Hill, perhaps a misspelling of the name of the person who first deeded the land in 1830, Solomon Hoge. Solomon Lafayette Hoge was born on July 11, 1836 in nearby Pickrelltown, a short distance southeast of Bellefontaine. In 1898, the land was sold to Charles D. Campbell, in whose name Campbell Hill is now known. Campbell sold the hill and surrounding land to August Wagner, who was the original brewer of Augustiner and Gambrinus beers. (These brands are now the trademarks of the Gambrinus Company of San Antonio, Texas, though the company has stopped production of these beers.)

In 1950, the family of August Wagner deeded Campbell Hill and the surrounding 57.5 acres (233,000 m2) to the Federal government of the United States. The government then stationed the 664th Aircraft Control and Warning Squadron on the hill in 1951. The 664th AC&WS and similar military units were eventually superseded by the North American Aerospace Defense Command (or NORAD), and the base in Bellefontaine was closed in 1969.

A petition to rename Campbell Hill after former Alaska Governor Sarah Palin appeared on the White House's Web site in 2015; it was an attempt to satirize the Department of the Interior's decision to change the name of Alaska's Mount McKinley back to Denali that year. 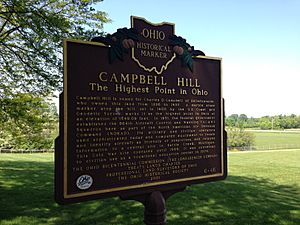 All content from Kiddle encyclopedia articles (including the article images and facts) can be freely used under Attribution-ShareAlike license, unless stated otherwise. Cite this article:
Campbell Hill (Ohio) Facts for Kids. Kiddle Encyclopedia.