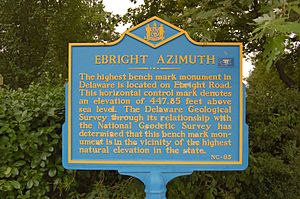 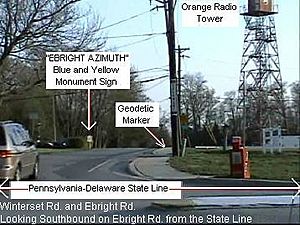 Southbound view of the peak of Ebright Azimuth from the state line, April 2006

The Ebright Azimuth is located about 6.5 miles (10.5 km) north of downtown Wilmington, Delaware, in far northern New Castle County, within a few feet of the Pennsylvania state line. It is near Concord High School, to the north of Naamans Road, at the middle of the intersection of Ebright Road and Ramblewood Drive. This is an entrance to the Dartmouth Woods development.

Surveying by Delaware Geological Survey personnel indicates that the mobile home park just west of Ebright Road is at least 2 feet (61 cm) higher than the benchmark.

Ebright Azimuth is named after James and Grant Ebright, who owned the property on which the benchmark was placed. An azimuth is an angular measurement in a spherical coordinate system.

Since the schematic photograph was taken the blue and yellow monument sign has been moved across the street closer to the geodetic marker. A curb extension has been installed, and the area around the sign has been modestly landscaped.

The self-supporting radio tower just south of the benchmark was constructed in 1947 by Western Union as part of a historic C-band microwave radio relay system that linked New York City and Washington, D.C. This site was assigned the name "Brandywine" in recognition of Brandywine Creek located several kilometers to the west and was licensed with the call sign KGB29. Western Union's engineers specified a heavy-duty prefabricated fire tower structure, which allowed the microwave transmitters and receivers to be installed inside the cab. "Dish" antennas, mounted behind the window openings, were aimed towards the adjacent relay stations at Mt. Laurel, New Jersey, 33.8 miles (54.4 km) to the northeast, and Elk Neck near Elkton, Maryland, 30.5 miles (49.1 km) to the southwest.

All content from Kiddle encyclopedia articles (including the article images and facts) can be freely used under Attribution-ShareAlike license, unless stated otherwise. Cite this article:
Ebright Azimuth Facts for Kids. Kiddle Encyclopedia.