Mars Hill is a town in Aroostook County, Maine, United States, nestled at the foot of Mars Hill Mountain. The town borders with Wicklow Parish, New Brunswick, Canada. The region is mainly agricultural. The population was 1,493 at the time of the 2010 census. 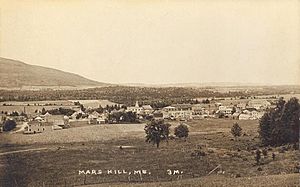 The town of Mars Hill is named for Hezekiah Mars, who camped for three years at the base of Mars Hill Mountain. In 1834, the first industry was cutting timber, particularly trees for masts. Farming later became important.

Following the end of the Aroostook War in 1839, a boundary line between Maine and New Brunswick was cleared and iron markers were put in place three years later.

The first mill opened at Rocky Brook in 1856.

In 1860, the first school was established for the community of Mars Hill. Further development of the community was delayed until after the American Civil War.

The Bangor and Aroostook Railroad arrived in 1892, allowing shipment of local produce to distant markets.

A six-bed community hospital was established in 1912.

In 1922, an intense fire devastated the business district in town. Mars Hill businesses were promptly rebuilt.

In 1937 the Walter T.A. Hansen Memorial Library was opened.

In the 1960s, Big Rock Ski Area was founded on Mars Hill Mountain.

In 2006, Maine's first wind farm was installed along the top and northern side of Mars Hill Mountain.

During and after World War II, the Mars Hill and surrounding economies were dominated by military spending. In 1947, the Limestone Army Air Field was built in Limestone. It opened in 1953 and was renamed the Loring Air Force Base. Aroostook County was chosen due to its strategic location as the closest point in the continental United States to Europe. The 1991 Base Realignment and Closure Commission recommended closure of Loring and the base closed in 1994.

During the late 1950s, two hundred acres were purchased to develop a local recreation area, and by 1960 the Big Rock Ski Area was opened. Bigrock Ski Center was purchased in 2000 by the Maine Winter Sports Center (MWSC) through grants by the Libra Foundation.

On March 27, 2007, a wind farm project was commissioned to be constructed on Mars Hill Mountain by First Wind, a Massachusetts renewable energy company. The Mars Hill Wind Farm was projected to have cost $85 million. A total of 28 General Electric 1.5 megawatt turbines were installed along the ridge and in the northern section of the mountain. The wind farm generates about 130 million kilowatt hours (kW·h) per year (15 MW·yr/yr)., with a capacity factor of 35%. Mars Hill Wind Farm was the first utility-scale facility in Maine, with projected capacity to produce enough electricity to power 20,000 homes. Mars Hill Wind Farm exports electricity to New Brunswick Power and has become an important component in the local economy.

There were 614 households, of which 28.0% had children under the age of 18 living with them, 52.8% were married couples living together, 10.4% had a female householder with no husband present, 4.1% had a male householder with no wife present, and 32.7% were non-families. 27.9% of all households were made up of individuals, and 12.8% had someone living alone who was 65 years of age or older. The average household size was 2.33 and the average family size was 2.82. 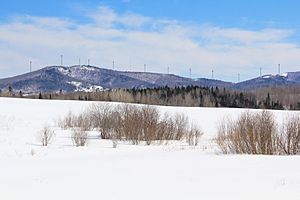 Mars Hill in late winter as seen from US Highway 1

According to the United States Census Bureau, the town has a total area of 35.20 square miles (91.17 km2), of which 35.13 square miles (90.99 km2) is land and 0.07 square miles (0.18 km2) is water. Mars Hill is split partly in half by the Prestile Stream, which runs directly between Fort Street and Silver Street, then crosses beneath the Fort Street Bridge. After passing the bridge, it flows between Pleasant Street and U.S. 1.

Mars Hill is located in the humid continental climate (Köppen climate classification Dfb), with warm, humid summers. Winters are cold and snowy. Daytime highs are generally in the 75–80 °F (24–27 °C) range through July, with overnight lows in the high 50s °F (around 15 °C). January temperatures range from highs near 32 °F (0 °C) to overnight lows averaging below 0 °F (−18 °C). 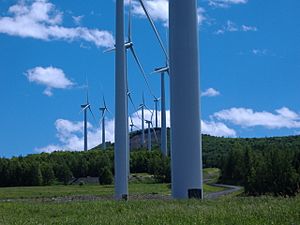 Mars Hill Mountain plays an important role in the Mars Hill community, providing a dramatic backdrop for photographs as well as magnificent views from atop its peak. It overlooks the Saint John Valley, in which Mars Hill is located. Maine's tallest mountain, Mount Katahdin is visible from the top of Mars Hill Mountain, over 85 miles (137 km) away.

A wind power project was begun on Mars Hill Mountain in the fall of 2006. A total of 28 GE 1.5 MW wind turbines were installed along the ridge and northern section of the mountain. The windmills are assembled in multiple parts. The towers, which are composed of three sections stacked together have a combined weight of 20,000 pounds, and are 80 meters (260 feet) tall. Each of the turbine's three blades (together, a rotor) are approximately 37 meters (121 feet) long, with a total rotor diameter of approximately 75 meters (246 feet). The rotor diameters of the turbines are comparable to the wingspan of a Boeing 747.

All content from Kiddle encyclopedia articles (including the article images and facts) can be freely used under Attribution-ShareAlike license, unless stated otherwise. Cite this article:
Mars Hill, Maine Facts for Kids. Kiddle Encyclopedia.